By newsroom on January 5, 2018Comments Off on Adidas India creates 3D face of Paul Pogba for latest OOH campaign 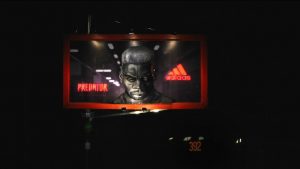 Posterscope India, the out-of-home (OOH) agency from Dentsu Aegis Network, has rolled out a massive OOH campaign to announce the launch of ”.

The core objective of the campaign is to build awareness about the launch of this flagship product from the house of Adidas. The one-month-long campaign is aimed at reaching out to people who are enthusiastic about football – both players and fans – across various age groups.

Based on the client brief, Posterscope created a campaign using a specially-designed 3D face of brand ambassador Paul Pogba to build impact and efficiency. The plain image was converted into a digital 3D model. While the creative was converted into a 3D file and was used for print production, detailing and painting of the final piece was done by hand.

The innovation showcased a 9ft long 3D face of Paul Pogba that protruded 4.5Ft on a 20X10 billboard. The innovation helped the brand to stand out and ensure long distance visibility. It is pertinent to note here that this is the first time in India that a massive 3D face has been placed on a unipole in the OOH space.

Based on the agency’s deep understanding on the requirement of the brief and with the help of their primary research (OCS), patented analytical tools (OOHZONE) and accumulated understanding, Posterscope zeroed down on a specific location in Delhi for the innovation. Innovation was done on Inner Ring Road at RK Puram towards Dhaula Kuan. The location of the unipole was specifically chosen so that it covers the high volume traffic on Ring Road and is a solitary unit at the required stretch of the road. 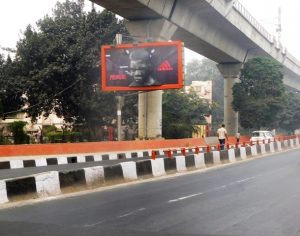 This resulted in the flawless execution of the campaign and all timelines were maintained without any compromise in quality. The innovation led to extensive and significant buzz around the product. This in turn has led to the desired exposure of the brand launch in the Indian market.

Commenting on the campaign, Sharad Singla, Senior Manager for omni channel marketing brand communication at Adidas said, Â “As a brand we wanted to make a bold statement, that was also in line with our product relaunch. We identified a powerful execution for outdoor which had an element of innovation, it brought to life the predatory instincts through the Pogba 3D execution on few sites.”

Aditya Goel, Senior Business Director, Posterscope said, “This was a brief where we had to think beyond the work that we had already executed for Adidas in the past. The creative, servicing and operation teams at Posterscope came together to execute a larger than life size 3D model. It is something which has not been tried so far in the country in the OOH space.”