By newsroom on August 28, 2015Comments Off on Duracell launches ‘Duracell #PowerCheck’ as part of Rugby World Cup sponsorship

Called the Duracell #PowerCheck, the unique measurement will share insight around the power and endurance that have proved vital ingredients for previous winners of the famous Webb Ellis Cup and that epitomise the Duracell brand.

To help celebrate, the brand has created a film to showcase a selection of defining moments in rugby. On air from now until November, the video will be shown online on YouTube, Facebook and by media partner Mail Online. 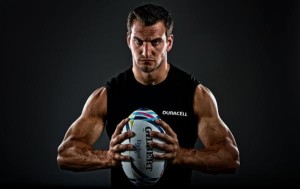 Duracell is an Official Tournament Provider for Rugby World Cup 2015, which kicks off in England on September 18 later this year. The Duracell #PowerCheck will be trialled at the World Cup warm-up matches in the build-up to the tournament.

Duracell will also provide a range of its batteries to support the tournament’s delivery from 18 September to 31 October, 2015.