Elections in Malaysia result in significant decline in online traffic, according to iPrice Group

By newsroom on May 24, 2018Comments Off on Elections in Malaysia result in significant decline in online traffic, according to iPrice Group 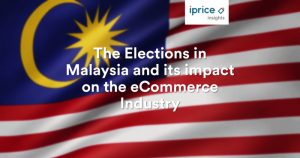 9th of May 2018 went down in history books as among the most significant days in the history of Malaysia. As the nation concluded the election period with the swearing-in of its seventh prime minister on 10th May, eCommerce platforms experienced a significant dip in online traffic as Malaysians were focused on the elections during this period. In a bid to understand online consumers, iPrice conducted this brief study to find out how the elections affected eCommerce platforms in the country.

• The study shows that the elections affected online traffic from the afternoon onwards.
• Online traffic remained normal in the morning but begins to decline steadily from 4.00PM onwards. This was evident when comparing online traffic to the previous period (9th April 2018).
• Multiple Malaysian media reported traffic congestions on most major highways from 2.00PM onwards. This suggests that most Malaysians diverted their attention from online shopping to pre-election preparations such as travelling to their voting areas in the afternoon.
• There was also a 34.8% decline in online traffic at 10.00PM when compared to the same time in the last period. This is significant as online traffic would reach its highest point around 10.00PM on regular days. 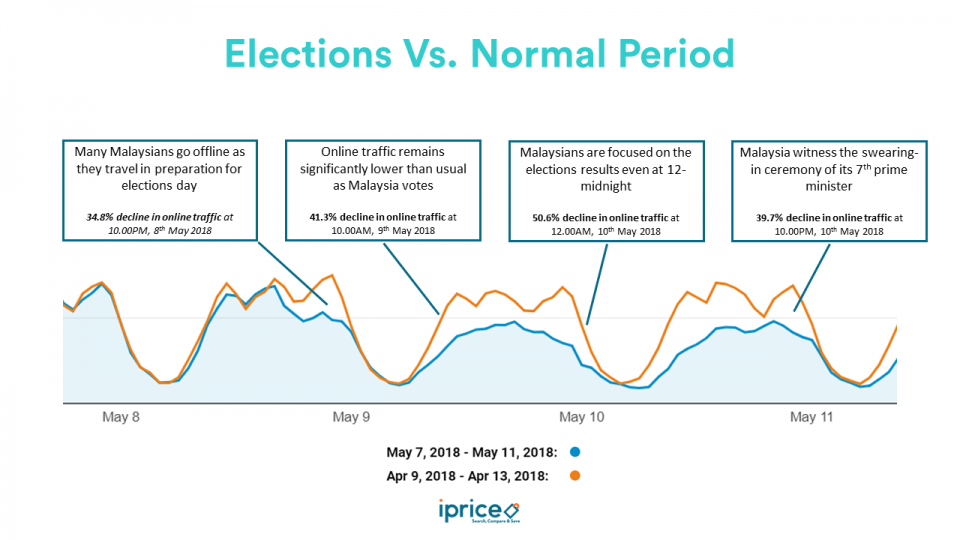 During Elections day: Malaysian shoppers are more focused on the elections than online shopping.

• On usual weekdays, online traffic in Malaysia would reach its highest points at about 11:00AM, 3:00PM, and 10:00PM. On elections day, online traffic reached its peak at 5.00PM and steadily declined for the rest of the day.
• This suggests that a small number of Malaysians return to online shopping when the voting period ended at 5.00PM. As nightfall comes, online shoppers return their attention to the elections and its results.
• On usual periods, Malaysians are actively shopping online in the evening until 12 midnight. On election night, online traffic was 50.6% lower than usual since most Malaysians remain awake for the results.

• On regular Thursdays, eCommerce platforms usually experience a steady increase in online traffic in the morning. However, online traffic was 56.5% lower than usual as Malaysians awake to the announcement of the elections results and public holidays.
• As mentioned earlier, online shopping would reach its highest point at about 10:00PM on regular weekdays. However, this was not the case as Malaysia witnesses the swearing-in of its seventh prime minister close to 10:00PM. Online traffic was 39.7% lesser than usual at 10.00PM.

A Number of Malaysians Still Shopping on Mobile Devices.

• Overall, there was a substantial decline in the number of online shoppers across all devices. However, the decline on desktop devices was slightly higher as compared to tablets and mobile devices.
• This suggests that many Malaysians were still shopping online on their mobile devices as they wait for their turn to vote. A report by Daily Express stated that some Malaysians waited as long as three hours for their turn to vote. Hence, voters at the waiting line would most probably have browsed or made purchases online through their mobile devices.

Elections in Malaysia result in significant decline in online traffic, according to iPrice Group added by newsroom on May 24, 2018
View all posts by newsroom →