By newsroom on January 15, 2018Comments Off on Etcetera Amsterdam Teams with Burger King to Unveil ‘the Worst’ Campaign Ever

Burger King has worked with Amsterdam creative agency Etcetera to launch a new campaign for their latest product release in the Netherlands in 2018: Grilled Dogs.

Those unacquainted with the Dutch language might miss the twist: the Dutch word for hot-dogs is ‘worst’. As Burger King is known for flame-grilling since 1954, the campaign idea is #GRILLTHEWORST.

Psychological research shows that people everywhere have a clear need to start the new year afresh, and to do that they need to make space by getting rid of the stuff they don’t like – and don’t need. 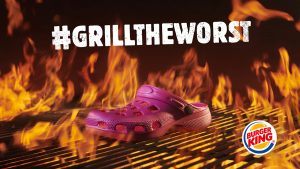 Burger King takes this one step further by inviting people to make space for new experiences by grilling ‘the WORST’. Yes, correct: setting ‘the WORST’ things alight and flame-grilling them. Those unacquainted with the Dutch language might miss the twist: the Dutch word.

The #GRILLTHEWORST campaign asks everyone who has something they want to let go of – big or small – to join an activation event in Amsterdam on Monday 15 January, where a team of Burger King grill masters will fire up the grill and ceremonially set light to the ‘WORST’ of 2017.

The campaign is launched by an online video featuring a series of ‘WORST’ things hitting the grill and getting flamed. Pink plastic clogs, tax bills and other ‘worst’ items from the year take a hit on the grill.

Tolga Büyükdoganay, Creative Director, Etcetera Amsterdam: “We are proud to start 2018 with the WORST campaign.”

Etcetera Amsterdam Teams with Burger King to Unveil ‘the Worst’ Campaign Ever added by newsroom on January 15, 2018
View all posts by newsroom →