By newsroom on February 19, 2016Comments Off on Fevicol Takes Bonding to Next Level in All New TVC from O&M

Fevicol, the largest selling brand of adhesives in India, has rolled out a new ‘Govinda’ themed TVC based on ‘dahi-handi’ celebrations to reinforce universal bonding that Fevicol has come to stand for.

Conceived and developed by Ogilvy & Mather, the TVC highlights how a strong bond and teamwork are central to forming the several-storey high human pyramid that characterizes ‘dahi-handi’ celebrations. Through the trademark ‘humour’ that Fevicol ads are known for, the TVC reinforces the promise of a strong bond that binds people to their culture, strengthening Fevicol’s positioning of being the ultimate adhesive.

Piyush Pandey, Executive Chairman and Creative director at Ogilvy & Mather – South Asia, commented: “Fevicol has always stood for ultimate bonding. Bonding beyond its physical manifestations, bonding of culture and humanity. The new film takes the festival of Govinda (Lord Krishna’s birthday) which is celebrated across the country by people making human pyramids to climb and break the clay pot which is symbolic of Lord Krishna stealing buttermilk from the Gopis (or Gopikas which in Sanskrit refers to a person in charge of a herd of cows). Fevicol in its tongue and cheek humour has created a hyperbole by making a pyramid that can even move from one location to the other.” 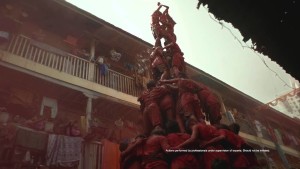 Vivek Sharma, Chief Marketing Officer at Pidilite Industries said: “Over the years, Fevicol has established itself as an iconic brand that has become synonymous with forging a strong bond. Fevicol has embedded itself in Indian consciousness and culture and is now part of everyday lingo. The new TVC reflects this generational bond and affinity that the people of India have for Fevicol.”

The film opens with a Govinda Mandal group gearing up to form a pyramid to break the Dahi-Handi suspended at a height. The neighbours are cheering them on as they are trying to reach for the pot. Typically they lose balance and the pyramid falls apart. But something unusual happens here: the boy at the top breaks it in one go and the formation remains intact.

A small boy points in a direction and in no time the pyramid starts moving there. The pyramid passes through the narrow lanes effortlessly, as if it were a single unit held by a strong bond. They go on to break the next Dahi-Handi and the film ends when a boy splashes water on someone. It washes off the colour on his back and reveals the Fevicol logo on his T-shirt.

Fevicol Takes Bonding to Next Level in All New TVC from O&M added by newsroom on February 19, 2016
View all posts by newsroom →