By newsroom on October 26, 2015Comments Off on Google Launches App to Aid with European Refugee Crisis 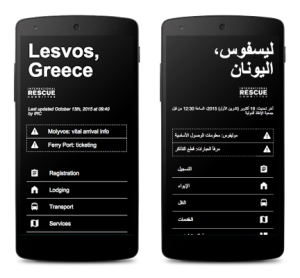 The refugee crisis currently occurring in Europe, the Middle East and north Africa is the worst in 60 years, with more than 11m migrants and refugees fleeing war-torn nations in the hope of finding safety, shelter and a new life.

However, one change that has made life a little easier for migrants is the proliferation of smartphones, enabling families to stay in contact while travelling, use mapping apps to plan journeys and even seek help on social media.

Google has responded to the crisis by developing an open source project called ‘Crisis Info Hub‘ that aims to disseminate hyperlocal information to refugees in a lightweight, battery-saving way. The tech giant has worked alongside the International Rescue Committee and Mercy Corps to produce the app, and partnered with NetHope to improve connectivity in the region so that refugees can access information when they most need it.

The app is currently live in Lesvos, Greece, with more locations coming online shortly. It will provide critical information on transportation, medical facilities, lodging and more in a variety of languages including English and Arabic.

Language barriers remain a huge issue for refugees, and Google has seen a five-fold growth in Arabic translations in Germany this year. In response, it has added Arabic as the 28th language for instant visual translation in the Google Translate app, enabling immediate offline translation of printed text and signs from English or German to Arabic.

The use of smartphones by refugees has revolutionised many aspects of migration, as well as transforming relief efforts. Fewer and fewer people are resorting to using human traffickers to make their way to safety, as they are able to access accurate maps and plan journeys themselves. Popular messaging apps like WhatsApp and Viber enable refugees to stay in contact with each other and their relatives at home, as well as giving aid workers a new way to contact people in need and spread vital information.

However, these changes have also brought new challenges, like the necessity of charging points and access to wi-fi at refugee camps and border crossing points. Organisations like the Civil Society and Technology Project at the Central European University in Budapest have created battery-powered wi-fi hotspots that can be work as backpacks, along with changing banks pieced together from easily-found parts to enable refugees to restore their power.

In many ways, the use of mobile phones by refugees echoes the way social media was able to transform the uprisings of the Arab Spring in 2010 and 2011, showing how technology that we often take for granted can have a profound transformative effect on how we know deal with large scale crises and upheaval.

Google Launches App to Aid with European Refugee Crisis added by newsroom on October 26, 2015
View all posts by newsroom →