By newsroom on February 17, 2016Comments Off on Havas Lynx pushes the boundaries of creative healthcare with new recruits 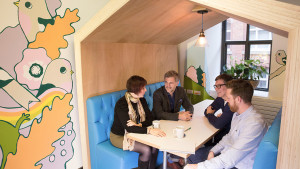 Havas Lynx, the leading global healthcare communications agency, and communiqué communications consultancy of the year has further bolstered its ranks with a string of high-profile recruits including three new award-winning creative directors. This expansion of the creative team follows on from the appointment of Tom Richards as Chief Creative Officer in April 2015.

Since Richards’ appointment, the Havas Lynx group has significantly invested in its creative talent, building on their un-paralleled expertise of science, strategy and technology. In the past nine months, it’s taken on 24 new creatives, bringing Havas Lynx’s creative team to over 70 people; making it one of the biggest creative healthcare departments in Europe.

The agency has also refurbished its workplace with an enviable new creative space that has already been used by global industry association, D&AD, for its New Blood Mixer.

As part of the creative growth, Havas Lynx has appointed three seasoned Creative Directors from non-healthcare backgrounds to oversee the delivery of high-calibre campaigns and ensure Havas Lynx’s creative output sets a new standard for the industry. It welcomes Paul Kinsella, Lou Shipley and Phil Howells.

Paul Kinsella brings over 13 years’ experience from working in agencies such as Euro RSCG WNEK Gosper, Cheetham Bell JWT and BJL. He is known for ideas, insights and creativity and is excited about the opportunity to work in healthcare. In his last three years alone, his innovative designs and concepts have won over 30 awards from ceremonies including Campaign, Kinsale Sharks, Roses, DADi and Fresh. Most recently, he gained recognition for his work on Whyte & Mackay’s whisky which featured in Campaign’s top ads of 2015.

The agency also welcomes Phil Howells, a multi-award winning creative director with over 30 years’ advertising experience. Phil’s portfolio includes work on a variety of campaigns for household names including Sure, Dirt Devil, Shop Direct and John Lewis, alongside working as part of the team that launched Peperami’s famous “It’s a bit of an animal”. His work has received an impressive string of industry awards such as: D&AD, Campaign Poster, Midsummer, London Interactive, Chip Shop, Montreux, The Roses and The Northern Marketing Awards.

Phil commented on his new role at Havas Lynx: “I’ve already been lucky enough to work with Havas Lynx on a freelance basis. I like their hunger, passion and ambition and I’m particularly impressed with the way they treat their people. Being part of Tom’s vision to raise the creative bar, not only within Havas Lynx but across the sector, has reignited my passion to do great work and also to inspire it.”

Havas Lynx’s Chief Creative Officer, Tom Richards explained: “Healthcare may not be known as a creative industry, but we’re determined to change that. It’s great to see so many high profile and brilliant creatives recognise this and join our mission. Our new appointments are evidence of a new and radical direction for healthcare. I’m excited to produce some life changing campaigns that will be born from some of the best scientific, strategic and creative minds in the business.”

Havas Lynx pushes the boundaries of creative healthcare with new recruits added by newsroom on February 17, 2016
View all posts by newsroom →