By newsroom on March 21, 2013Comments Off on HitBliss: We’ll pay you to watch TV commercials! 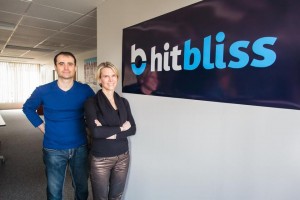 A US company is pioneering a service which effectively pays people to watch TV ads. The Massachusetts company HitBliss and its video streaming service pays people with “virtual cash” to watch targeted advertisements.

Viewers use the credit they earn to buy TV shows and rent movies from the company.

“This is radically different than anything people have ever seen before,” Sharon Peyer, cofounder and vice president of the company, told the Boston Globe.

Sharon and cofounder husband Andrew Prihodko launched a test version of the product this month.

“In exchange for watching advertisements, the consumer essentially gets compensated for their time and attention,” said Peyer.

About four to six minutes of viewing commercials can be redeemed for one new movie rental.

Users can rent movies like “Argo’’ or “Flight” just four months after they leave the cinemas . TV episodes from shows like “The Big Bang Theory” or “The Walking Dead” are available a day after they have aired.

The HitBliss app is only available for download on desktop computers and laptops for now.

One catch, reported the Globe: HitBliss advertising is largely targeted to very specific audiences. Users are asked to share lots of personal information.Viewers who provide more information earn credit at faster rates. But the company said it doesn’t share any of those details with advertisers.

How does HitBliss makes sure users actually watch the ads? They track screen activity. HitBliss stops the ad — and the virtual payment — if a user moves to another screen or turns down the volume.

A face pops aldo up periodically on screens to ask a user, “Are you still there?” Payments for the session are lost if the viewer doesn’t respond within a few seconds.

“There is no free pass,” explained Peyer. “They’ve got to actually pay attention and watch the ad.”

HitBliss: We’ll pay you to watch TV commercials! added by newsroom on March 21, 2013
View all posts by newsroom →