By newsroom on December 12, 2017Comments Off on isobel re-creates a scene from Peter Pan for their Christmas card 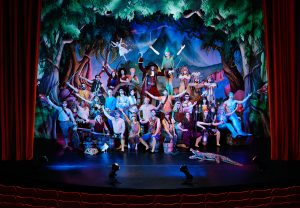 Creative transformation agency isobel’s latest Christmas card is out – this time re-creating a scene from Peter Pan for the West End stage.

It’s tradition that every year the team at isobel raids someone’s costume department, endures up to four hours of make-up and takes a day to shoot a tableaux scene for its Christmas card. We’ve seen everything from monks and chavs, to ballet, Glee, and the Christmas nursing home.

In the true spirit of theatre, Paul Houlding got a bit carried away as the boy who could fly during the ‘creation’ and took a fall from six feet up. He survived unscathed, bar a few bruises, and got straight back to it, declaring, “The show must go on!”

Rob Fletcher, Creative Partner at isobel, comments: “isobel’s annual Christmas card is more than just a tradition for us. It’s a chance to go bigger and better than we ever have; a chance to challenge ourselves to be more creative. We approach every card the way we approach any client project – with creativity, curiosity and ambition. As a result, each year the card becomes more unorthodox and harder to pull off.”

The agency has been sending out such Christmas card for 12-years now. The latest one was shot by Paul Thompson on stage at The Leatherhead Theatre. The National Theatre’s Costume and Props Hire department provided isobel with their costumes.

isobel re-creates a scene from Peter Pan for their Christmas card added by newsroom on December 12, 2017
View all posts by newsroom →