By newsroom on November 7, 2017Comments Off on Meet Tinqoh – Lebogang Rasethaba’s new superhero for Brothers For Life

Conceptualised by Joe Public, the ad introduces Tinqoh, a hero born and bred in the lush hills of ‘Indaweni.’ Fire, water and gravity are no match for this local superman who always answers the call of his community, until the day he’s faced with a completely different kind of challenge. 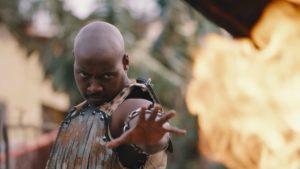 Brothers for Life promotes positive male norms and encourages the uptake of health services such as medical male circumcision (MMC), men taking up HIV Testing, consistent condom use by men and reduction of sexual partners.

Lebogang is known for the artistic lens through which he looks at socially conscious topics like this, whether in documentaries like The People Versus The Rainbow Nation and Prisoner 46764 or his #Operation45 brand films for Operation Smile, which won Creative Circle Ad of the Year in May.

But while Tinqoh’s subject matter is serious, the advert rather taps into South Africa’s filmic history of using humour to deal with trauma.

“We wanted to break down barriers,” says Lebo. “To take something serious and make it accessible so people feel more comfortable talking about it – because that’s the solution, or at least part of the solution. We have to be talking about these things.”

Meet Tinqoh – Lebogang Rasethaba’s new superhero for Brothers For Life added by newsroom on November 7, 2017
View all posts by newsroom →