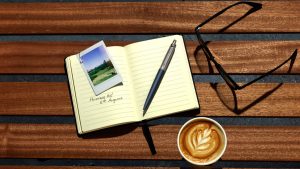 RAPP UK has created a suite of hero imagery for the launch of Parker Pens’ Jotter XL range. The concept, ‘View from The Bench’, celebrates the inspiration behind the range; the best vistas of London.

The suite is comprised of a series of luxury, flat-lay images featuring views of famous London vistas. The beautifully crafted shots display the pens alongside sketchbooks, notes, Polaroid photos of the views, and other creative accessories someone might bring with them on a day out.

RAPP UK’s team drew inspiration from the pens, imagining writers, musicians and photographers sitting on benches across London taking in iconic views and jotting down their thoughts. This became the basis for the campaign. The Jotter XL pens are named after the locations featured in the Polaroid snaps: Primrose Hill, Greenwich, Richmond and Alexandra Palace. Luxury goods photographer Thomas Rohde staged and shot the final campaign images.

Cathy Crocker, Art Director at RAPP UK, said “My creative partner [Copywriter, Oliver Easthope] and I scouted and shot iconic views from across London. We thought about what we do as creatives who journal and sketch, and decided to gather ‘mementos’ from each location to bring our images to life. We wanted to draw viewers into vignettes of those moments of contemplation, putting them in the shoes of a creative sat on a bench with an open notebook and the Jotter XL in-hand.”

Josh Burt of Parker Pens said, “We love that the Jotter XL release celebrates a city that attracts and inspires people from all over the world. London is an iconic city and the Jotter is an iconic pen. This is a beautiful, passion-infused campaign, which we are immensely proud to share.”