By newsroom on July 8, 2013Comments Off on ‘The’ Gets Its Own Symbol In The Alphabet ‘Ћ’

The word “the” is the most commonly-used word of the English language; it makes an appearance in around 80% of all written paragraphs.

To recognize its usage and usefulness, Melbourne-based Australian restaurateur Paul Mathis has created a new symbol as a short-formed substitute for “the”. 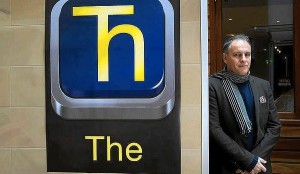 The “the” symbol looks like what happens when an uppercase “T” conjoins with a lowercase “h”: ‘Ћ’.

Like an ampersand (&) for “and”, Ћ hopes to: save “penstrokes”, “keystrokes” and “space”; make tweeting and texting more efficient; and be the “next step in communication evolution”.

According to newspapers, Mathis has invested over US$60,000 to develop the Ћ symbol.

He’s also created a range of mobile phone keyboards, the ‘THE Keyboard’—with the most expensive in the range featuring shortcuts for 14 most-used words in the English language.

“The word ‘and’ is only the fifth-most used word in English and it has its own symbol—the ampersand,” Mathis told The Age. “Isn’t it time we accorded the same respect to ‘the’?”

‘The’ Gets Its Own Symbol In The Alphabet ‘Ћ’ added by newsroom on July 8, 2013
View all posts by newsroom →