By newsroom on February 24, 2016Comments Off on The New York Times CEO Mark Thompson: ‘branded content needs to be worth paying for’ 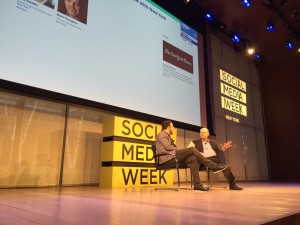 In an eye-opening keynote at New York’s Social Media Week, New York Times (NYT) chief executive Mark Thompson outlined the future of the publication and how it fosters innovation.

“Sometimes, you should just go with your instinct”; a phrase that reverberated not only around the main room at The Times Centre is Manhattan on Febraury 24, but also around the publishing world in recent times. It was a line that Mark Thompson wanted to spread; a message to other publications signalling ‘this is how we do things at the New York Times”.

Thompson enlightened his audience for 50 minutes, highlighting how the established newspaper is not only leading the charge for innovation within publishing but also explaining how it looks beyond its data to create interesting and evergreen branded content. “You have to create content that is worth paying for”, started Thompson before alluding to the fact that NYT is more than just the “marketing puff” of old. Instead, NYT believe that their branded content needs to be along the same lines of the programming outputted by HBO; a statement that clearly belies the NYT’s intent to become a global leader in brand journalism.

Thompson’s deep dive into the NYT’s innovation mindset did not end with branded content but instead set the foundation for his talk. 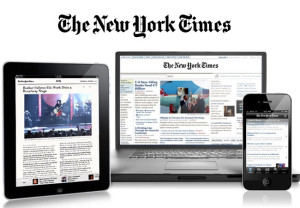 “We’re learning from experiments, taking part in trials” responded the media executive when probed about the NYT’s attitude to Instant Articles; “cautious experimentation” is the newspaper’s stance on an issue that is splitting publishers and is a discussion that will be common among delegates and speakers alike at this year’s Social Media Week – as will be VR.

The medium, a long thought of fad consigned to science fiction for decades, is on the cusp of becoming mainstream, with Samsung and Facebook’s recent announcement at Mobile World Congress a sign of its potential impact on daily lives.

Thompson wants his teams to be brave; he wants his team to reflect the NYT’s new publishing strategy, which is one of passion and innovation. “The role of a chief executive is not to stop people innovating, but instead to curate it”. It’s this attitude that sets the NYT apart from other publishers and one that will mean all who still follow corporate processes, will end up falling behind.

The New York Times CEO Mark Thompson: ‘branded content needs to be worth paying for’ added by newsroom on February 24, 2016
View all posts by newsroom →