UK ad spend to grow 4.2% in 2018 amid digital transformation, according to Dentsu Aegis Network

By newsroom on July 6, 2018Comments Off on UK ad spend to grow 4.2% in 2018 amid digital transformation, according to Dentsu Aegis Network 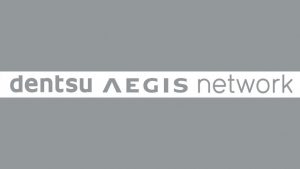 Global events such as the Winter Olympics & Paralympics, the FIFA World Cup in Russia and US mid-term elections will play an important role in stimulating growth.

Geographically, Asia Pacific and North America are the major growth regions, contributing 41% and 32% of the global increase respectively.  Western Europe accounts for 13% with Latin America at 8% and Eastern Europe 5%.

Investment in the UK market is now expected to grow in 2018 by +4.2% to reach £20.4 billion.  This growth is driven by a better than expected performance in Q1 and higher investment expectations around the World Cup.  Following slight growth in Q4 2017, the TV market continued to out-perform expectations in Q1 2018 with YoY revenues climbing by 5.1%.

The decision of the UK to leave the EU had an impact on the British ad industry, yet the wider geopolitical context isn’t preventing UK companies from increasing their ad spending. Advertiser confidence levels have mounted over the last months in Europe, led by the United Kingdom.

Despite good overall audiences, especially due to digital consumption and the demand for high-quality print content, the consumption shift towards digital media has not been fully monetised by media owners. Publishers are investing and preparing their data offering to improve their digital business performance and allow for programmatic buying across media and in real time.

Commenting on the latest forecasts, Rachel McDonald, Managing Director of Dentsu Aegis Network North, said: “In the context of synchronised economic growth across the US, Europe and Asia, these figures point to a more positive outlook today than at the beginning of the year and represent a modest but encouraging source of optimism. We are seeing upward revisions in most key markets, with emerging economies such as India showing high rates of growth. The US economy is growing strongly as economic stimulation and tax cuts filter through. Spend in China continues to grow at pace, though driven almost entirely by the eCommerce platforms, Alibaba, Tencent and Baidu. Digital remains the dominant growth area with 25% of global advertising spend expected to be delivered through mobile for the first time. Digital is now the leading form of advertising in 21 out of the 59 markets we track.” 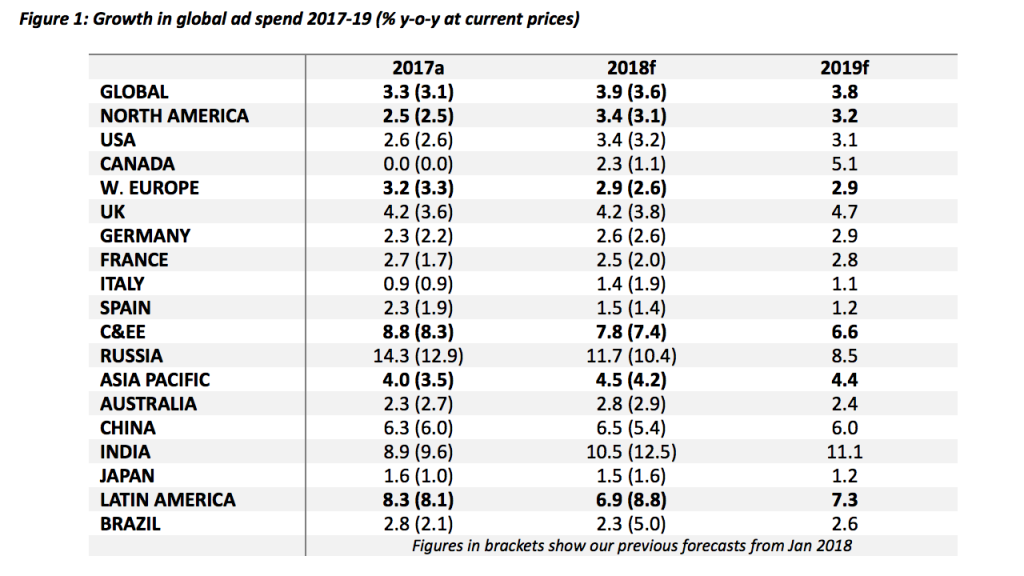 Mobile On The Go 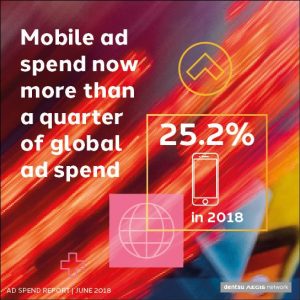 The mobile device is steadily becoming our primary point of access to all digital services and content. In 2018, 52.2% of all worldwide online traffic was generated through mobile phones, up from 50.3% in the previous year, according to Statista.

People now spend an unprecedented amount of time on their smartphones—more than five hours a day, according to some estimates.  This growth in usage is largely driven by the widespread availability of high-quality digital Video. Mobile Video consumption is exploding among all age groups and content categories. Nine in 10 Social media users opt for mobile browsing, with mobile apps accounting for 70% of time spent on Social media.

Reflecting this, mobile is forecast to represent a quarter of global ad spend 25.2% this year exceeding the previous prediction of 24.8%.  With Mobile payments forecast to be more popular in the coming years, Mobile is set to continue on a positive growth trajectory a forecast 23.3% in 2018 and 18.8% in 2019. 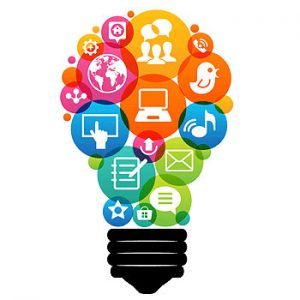 As previously predicted, Digital will overtake TV for the first time this year to account for 38.4% share of total ad spend vs. 35.5%. In the US, Digital spend is forecast to overtake TV in 2019.

Programmatic ad spend is expected to grow by 23.2% in 2018 and 19.1% in 2019 as the ability to consolidate programmatic buying strategies across formats and devices continues to be an opportunity for advertisers to reach the most valuable audiences at scale.

UK ad spend to grow 4.2% in 2018 amid digital transformation, according to Dentsu Aegis Network added by newsroom on July 6, 2018
View all posts by newsroom →