By newsroom on August 31, 2017Comments Off on Very.co.uk shows how to ‘get more out of every day’ in partnership with Sky Living

Online retailer Very.co.uk has announced its first full channel sponsorship of Sky Living. The campaign will go live on September 1 and runs for six months across linear TV, VoD and online.

Debuting on Sky Living, the campaign shows consumers how to ‘get more out of every day’ by showcasing Very’s department store range. The creative will be run in three bursts, aligning to specific occasions throughout the six-month period. In addition to its on-air creative, Very will further communicate its partnership to its customers via its website and customer communications.

Sky Living is the home to US dramas such as Grey’s Anatomy, Madame Secretary, Blindspot and Criminal Minds. Within the sponsorship period it’s just been announced that Sky Living has secured the highly anticipated Good Doctor from the creator of the Emmy award winning House. In the run up to the biggest retail period of the year, Very will have a consistent presence among its key audience across multiple platforms featuring must-watch programming. 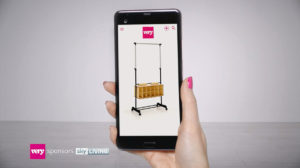 Very is part of Shop Direct –the UK’s second largest pureplay digital retailer, with annual sales of almost £1.9 billion. Its other digital department store brands are Littlewoods.com and VeryExclusive.co.uk.

Rachel Bristow, ‎Director of Partnerships at Sky Media, commented: “Very has an extensive offering and will be able to take advantage of Sky Living’s engaged audience and world class programming to showcase its range of products. We’re thrilled that Very has chosen Sky living to be its first full channel partnership.”

Andrew Roscoe, Head of Brand at Shop Direct said: “This partnership gives Very an always-on solution to support all department categories across the key Autumn Winter period, as well as January and February – which is a much quieter period for other retailers. Very also has a natural synergy with Sky Living’s programming, which has strong female characters across many different genres and gives the brand the opportunity to showcase how our consumer can get more out of every day.”

The partnership between Very and Sky Living was brokered by Sky Media, the advertising sales division of Sky, and The Story Lab.

Very.co.uk shows how to ‘get more out of every day’ in partnership with Sky Living added by newsroom on August 31, 2017
View all posts by newsroom →