By newsroom on July 10, 2017Comments Off on WARC’s report highlights the impact planning disciplines are having on the marketing landscape

WARC, the global authority on advertising and media effectiveness, has released the results of its first worldwide survey of senior strategists, highlighting the impact the planning discipline is having on the ever-changing marketing landscape.

The new global survey was conducted over the last year. Results are based on interviews with a regionally-balanced sample of 75 agency-side strategists and executives. Its key findings are:

Strategy’s Influence Has Been Growing

61% of respondents to the survey said the planning discipline had gained influence within their agency over the past year. 46% said they were becoming more influential for clients. Half also said that their planning teams had grown in headcount in the past year.

Joseph Clift, Business Analyst at WARC and the report’s author, said: “The responses to WARC’s global survey suggest that a major driver of the growing influence of planning is the increasing complexity of the marketing landscape. As marketers are faced with an ever-growing number of channels and approaches, strategists are well placed to act as an expert guide for others.”

Fragmentation is a Major Challenge for the Future

The survey suggested strategy teams are increasingly made-up of specialists rather than generalists: digital, social, and CRM strategists are on the rise. As a result of this trend, there is a sense that the traditional ‘brand planner’ is under threat. Some see the trend as a positive, as it brings more skillsets into planning teams. But some mourn the loss of ‘big picture’ strategy.

Gareth Kay, Co-Founder of Chapter SF, said in his commentary contained in the WARC report: “We are specialising ourselves into irrelevance. All of this fragmentation in the core role of the planner is creating brands that are fragmented into a million little pieces.” 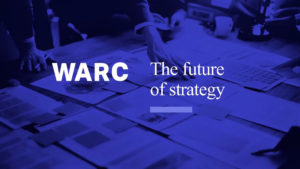 When asked for planners’ biggest future opportunities, the most frequent answer (cited by 72% of the survey) was the opportunity to move ‘upstream’ by helping clients solve business problems rather than only focusing on their ad campaigns.

However, 67% of respondents cited the growing pressure from clients – cost-cutting and the desire for strategists to be involved ‘downstream’ in tactical, short-term work – as representing a major threat to the planning discipline’s future. Management consultancies are also increasingly offering strategic marketing services: a trend cited by many survey participants as a threat to the agency planner’s future.

Guy Murphy, Worldwide Planning Director of J. Walter Thompson, commented: “What is key is for planning to add value to a client’s business. Planning’s future value will depend upon its ability to show that planning matters.”

The Strategy Team of the Future

Strategy teams are likely to be hiring and growing, with 53% of survey respondents at creative agencies saying they had increased their team’s headcount in the past year. The skills that respondents say they are looking for are not new – they want intellectually curious people able to distil complex thoughts into human insights.

But the survey responses suggest planning teams are increasingly expected to work in new ways: briefs need to be turned round more quickly than ever before, and collaboration with other teams within the agency, particularly creative teams, is becoming more important than ever.

Summing up, David Tiltman, WARC’s head of content, said: “The Future of Strategy report uncovers a discipline that is gaining influence, with marketers increasingly in need of sound advice in a fast-changing industry. But strategists face many future obstacles, including the fragmentation of skillsets, tightening budgets and a growing threat from consultancies.”

The full report, including more data, analysis and exclusive commentaries from 12 senior survey participants, is available for WARC subscribers here.

WARC’s report highlights the impact planning disciplines are having on the marketing landscape added by newsroom on July 10, 2017
View all posts by newsroom →