By newsroom on August 19, 2013Comments Off on Carlsberg Launches Live Data-Powered Fan Site 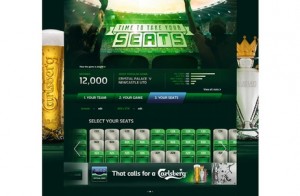 The website and ‘Time To Take Your Seats’ campaign was created by The Marketing Store and also invites fans to try and win tickets to games of their choice over the next 10 weeks.

LED perimeter advertising at selected matches will support the campaign and fans will be encouraged to share links on social media in exchange for additional prize draw entries.

Dharmesh Rana, senior brand manager at Carlsberg UK, said: “We are excited to be launching our first activity to celebrate the beginning of the new Barclays Premier League season and giving true football fans more opportunity to see the game they love live in an interactive way.”