By newsroom on March 4, 2016Comments Off on College Ad with Couple Kissing in the Library Boosted Applications and Just Won an Award 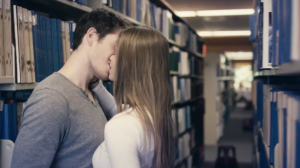 A college recruitment ad that made waves in 2015 for including a scene of a couple making out in a library has been named the best university commercial of the year.

Kira Academic, a tech company that helps admissions departments interview applicants by video, honoured the University of Moncton’s commercial out of some 100 ads, following a process that included voting from the company’s network and the public.

The 30-second spot focuses on French—spoken at the school, which is located in Canada’s bilingual New Brunswick—being a defining characteristic and point of pride. “It’s the language of progress, business—and of other affairs,” the narrator says, playing on “langue,” the French word for “language” as well as “tongue.”

But the single steamy shot—slipped between scenes of partying, lab work, studying and sports—became a point of controversy, with the head of the school’s own professors’ association condemning the video as pathetic, and coverage at outlets including CBC, Gawker and Huffington Post.

Kira explains in depth why the selection won: It plays well to its audience (hormone-addled teenagers), and applications spiked 22 percent following the campaign. While it’s tempting to lament that the University of Melbourne’s more high-minded (if tedious) bit of choreography didn’t rise to the top of the pile, there’s also better rubbernecking potential in the Moncton choice.

That is to say, it takes a special kind of Puritan to insist that any college is too serious for kissing. And it’s fun to see stuffy, self-serious academics lose their minds over the depiction of a known reality (and selling point): Undergraduate studies are an opportunity for both educational and social development (and a chance to have fun before stumbling into the grimmer realities of working life).

The brouhaha was—and remains—all the better for the fact that a little necking is probably one of the more innocent things that’s happened in the stacks of any respectable college. Kudos to Kira for finding a way to milk the story for its own purposes.

College Ad with Couple Kissing in the Library Boosted Applications and Just Won an Award added by newsroom on March 4, 2016
View all posts by newsroom →