By newsroom on December 20, 2017Comments Off on FCB Cape Town launches a new ad for the ‘Safely Home’ initiative

Now the makers have release a new version – ‘World’s Biggest Idiot?’ – just in time to remind us all to guard against distractions, like that mobile phone, when driving over the December holiday period. 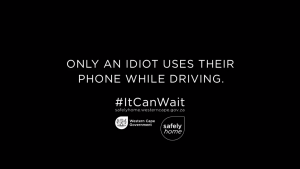 Statistics show that male drivers are a high-risk group, which is why women pay lower car insurance. In the last five years, of the 6 581 drivers who have been killed on Western Cape roads, 88.4% were males (1 204), and 11.4% were females (156). This represents 7.7 male drivers killed for every one female driver.

FCB Cape Town launches a new ad for the ‘Safely Home’ initiative added by newsroom on December 20, 2017
View all posts by newsroom →