By newsroom on July 17, 2018Comments Off on Finnish Beer Karhu Invites Trump and Putin to Hold Talks in a Sauna

Throughout history, people have negotiated, prepared or at least celebrated deals in Finnish saunas. In the sauna, people are their most genuine selves and decisions are made fairly and in good spirit. 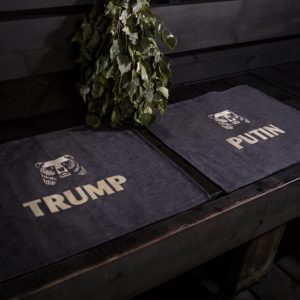 During the upcoming summit, Karhu beer – along with its agency hasan & partners – wants to help ensure these things it believes in by inviting Presidents Vladimir Putin and Donald Trump to negotiate in the spirit of true honesty – in the Finnish sauna.

All over the world, Finns are known for their honesty. Could it be because Finns, from childhood onwards, are taught how to relax and talk matters through in the warmth of the sauna – honestly and in good spirit? And if needed, in a very straight-forward way!

The Finno-Ugric peoples have been sauna bathing for 10,000 years. A wide variety of problems have been resolved and agreements negotiated in the sauna. 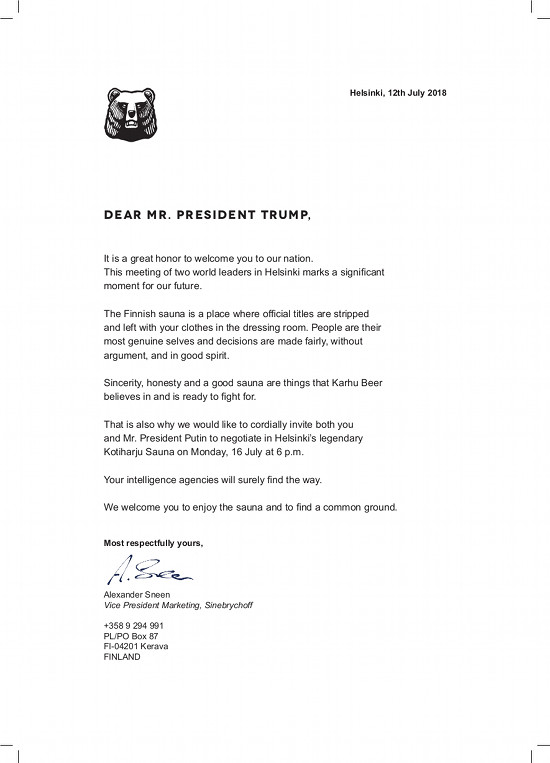 It’s where a daughter’s hand in marriage is requested from a potential father-in-law, and where plans are launched. In a relaxed frame of mind in the warmth of the sauna, fathers have traditionally encouraged their sons to discuss even delicate issues. The Finnish sauna has had great significance in political negotiations, as well.

“Already during President Kekkonen’s time and especially then, many political decisions were boosted by the sauna experience. Prominent decision-makers and leaders were invited to the log sauna at Tamminiemi to discuss matters of national and international importance,” says Kristian Miettinen, member of the Finnish Sauna Society.

The world’s most popular sauna beer, Karhu, embraces sincerity, honesty and a good sauna experience. That is also why Karhu would like to invite the Russian and U.S. presidents to be part of Finnish sauna culture.

“This meeting of two world leaders in Helsinki marks a significant moment for our future. The sauna carries special importance to the identity of Finns – after all, Finland’s longest-serving President even declared he couldn’t imagine life without it,” states Sinebrychoff Vice President Marketing Alexander Sneen.

Finnish Beer Karhu Invites Trump and Putin to Hold Talks in a Sauna added by newsroom on July 17, 2018
View all posts by newsroom →