By newsroom on November 12, 2018Comments Off on Forensiq by Impact earns MRC accreditation for SIVT Detection and Filtration and Viewability Measurement 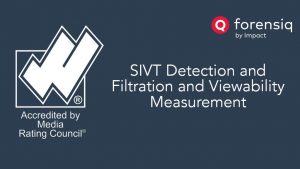 Impact, a natively-integrated suite of products for fraud protection, marketing intelligence, and performance partnership management, is proud to have confirmation that Forensiq meets the MRC’s rigorous requirements for valid, reliable and effective measurement.

Through sophisticated machine learning and advanced bot fingerprinting, Forensiq partners with agencies, brands and enterprises to identify and block evolving forms of IVT, including fraudulent traffic. Tapping into protection that extends across desktop, mobile web and in-app environments, Forensiq’s powerful tools protect partners’ digital spend across devices, while ensuring integrity of the domain and app placement.

“Fraud remains an ongoing threat in today’s evolving marketing landscape, with mobile and in-app SIVT posing an especially costly risk to media buyers,” said Marc Fanelli, GM, Forensiq. “As a vendor on the forefront of mobile fraud protection for the past three years, Forensiq is proud to gain accreditation from the MRC. We’re thrilled to not only be recognized for our uniquely capable mobile expertise, but also for our reliable technology that’s protecting the industry from fraud across every part of the marketing funnel.”

“We applaud Forensiq for meeting the rigorous requirements necessary to receive MRC accreditation across these three key environments for digital advertising,” said George W. Ivie, Executive Director and CEO, MRC. “Forensiq is among a small handful of companies to date that have received MRC accreditation for its SIVT detection for in-app display and video served impressions functionality, which demonstrates its role as an industry leader in the multi-platform evolution of ad solutions to screen for invalid traffic.”

These accreditations not only position Forensiq by Impact as an industry leader, but also underscore Forensiq’s credibility in ad verification and digital campaign measurement:

“As we empower companies to build and grow their business across screens around the globe, accurate traffic verification is imperative to reaching valuable video ad viewers at scale,” said Scott Alexander, COO, LKQD. “Forensiq’s traffic detection technology enables us to monitor and detect invalid traffic in real-time, allowing us to provide higher quality impressions for our partners.”

Forensiq by Impact earns MRC accreditation for SIVT Detection and Filtration and Viewability Measurement added by newsroom on November 12, 2018
View all posts by newsroom →