By newsroom on August 27, 2015Comments Off on Heineken transforms London landmark into a virtual rugby stadium to celebrate World Cup 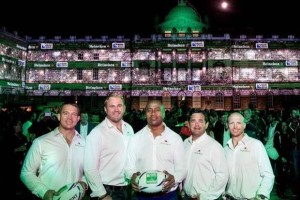 The event hosted 900 guests at the London venue and featured a set from British band Everything Everything to kick off the partnership.

Rugby stars Jonah Lomu, Will Carling, John Smit, Matt Dawson and Scott Quinnell joined for the projection experience, which was initiated by a coin toss from the winner of Heineken’s coin toss competition.

Heineken kicked off the campaign in June with a worldwide search for 48 fans to win the chance to open a match with an official coin toss. Winners will get the opportunity to attend matches in England and Fiji. 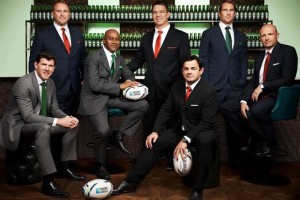 Heineken signed former England captain Will Carling to the campaign, as well as Matt Dawson, Scott Quinnell, Rocky Elsom and Shane Horgan, who will also take part in an online-only pundit panel throughout the tournament, called the Heineken Rugby Studio.

Luke’s, M&C Saatchi Sport and Entertainment, Publicasity, RPM, Starcom Mediavest and Possible are the agencies involved for this project.

Heineken transforms London landmark into a virtual rugby stadium to celebrate World Cup added by newsroom on August 27, 2015
View all posts by newsroom →