By newsroom on April 14, 2016Comments Off on Hundreds of hitchhikers sent across Europe with only Red Bull as currency 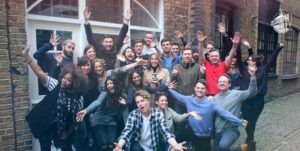 Red Bull has sent over 150 teams of students on a journey across Europe with only cans of Red Bull as currency and is broadcasting their adventures each night.

The 165 teams are made up of three students each from more than 50 countries and their objective is to reach Paris. Around 500 participants are uploading footage of their travels to a central editing suite as they go, which Red Bull is packaging into a nightly highlights programme.

The stunt was carried out by creative agency Telegraph Hill.

Hundreds of hitchhikers sent across Europe with only Red Bull as currency added by newsroom on April 14, 2016
View all posts by newsroom →