By newsroom on December 4, 2017Comments Off on Kimono Meet Robots and Björk in an Intriguing Celebration of Japanese Culture for Melco

An intriguing new exhibition, Kimono Roboto brings together sound and motion to present an artistic exploration of the kimono from its early beginnings to present day. 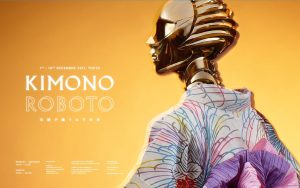 Thirteen kimonos will be on display in a circular space. At its centre stands an animatronic robot wearing one ‘hero’ kimono. Around the walls of the exhibition, which was conceived by fashion show specialists Bureau Betak with creative direction by Remi Paringaux, are a series of images and films created for the show.

Commissioned by Melco, the exhibition reflects the kimono’s trajectory from attire for everyday life in the late 16th century, to its status as a living work of art, and its powerful influence on 21st century fashion and popular culture. 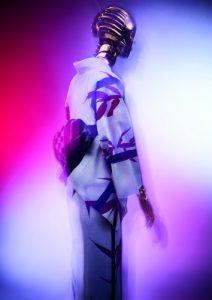 Bespoke robot models, designed by Warren and Nick with Tom Blake and Gavin Coetzee and created by renowned animatronics builder John Nolan Studios, will wear the kimonos. The films for the exhibition will explore the dichotomy between the soft folds of the fabric and the hard, golden surface of the robots. According to the team, each kimono is presented as a new ‘chapter’ which dictates the colour and mood of the film.

“The films are going to be shown on a large scale about four metres high and 24 metres wide, so they will really impact and fill the gallery space. They have been shot to entwine with specially composed music, immersing viewers in a new sensory experience. As each kimono explores a different style and time period, we have honed the look and feel to react in a different way to the new surfaces, designs and styles,” comments VFX Supervisor Duncan Horn.

To capture the films, the exquisite kimonos were flown to London where Warren and Nick shot them on their robot models in West London.

“The models are animatronic but there were some elements of rigging we wanted to completely remove in the final films. Because of the size of the films, we made sure to get a lot of footage that we could experiment with in the edit,” adds Duncan.

Icelandic singer Björk also partnered in the exhibition. The music video for her track Utopia will be screened at the exhibition. The film was also directed by Warren and Nick with CG by Analog Films. The team also brought Duncan Horn on board to finalise the look of the singer in the video. 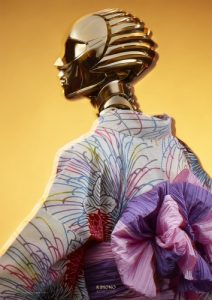 “It was an incredible project to be involved with, Björk has such a distinctive style and an incredible artistic vision. It was a pleasure to be a part of the team that helped bring some of her ideas to life,” says Duncan Horn.

Lawrence Ho, the CEO of Meclo Resorts & Entertainment stated, “I am positive that this project is one of overflowing passion. Ever since I was a child, I have been enthralled by the art and culture of Japan. I am thrilled that this enthusiasm has been brought to life by Melco. I am honoured to be able to show my respect to each and every one of our partners and the creators of the kimono, as well as the Japanese tradition, its culture, and its arts. Japanese culture is an exciting thing, and ‘kimono’ in particular is something that is deeply impressive. I hope to convey the wonder of kimono to the people of the world just as the extraordinary artist Bjork did in her newest music video.”

Kimono Roboto is a project initiated by Melco Resorts & Entertainment that started in 2014. There will be 13 kimonos on display including the “Tabenoshi Bunyou Furisode” by “Chiso,” a 460-year-old shop that uses kyoyuzen dying, “Keicho Momoyama Furisode Matsukawa Bunyou” by Fujii Kan, creators for the imperial household, and more.

The Kimono Roboto exhibition will be held across a 10-day period at Tokyo’s Omotesando Hills starting December 1.

Kimono Meet Robots and Björk in an Intriguing Celebration of Japanese Culture for Melco added by newsroom on December 4, 2017
View all posts by newsroom →