By newsroom on January 9, 2018Comments Off on nineteentwenty Put the Flair into the Fair in Suzuki Dodgems Spot by Red Brick Road

Suzuki released ‘Dodgems’, to showcase the safety features of its latest range of vehicles. Part of the ‘Enjoy the Ride’, campaign created by Red Brick Road, the 60” spot, directed by Blinkink’s Noah Harris, is based in a night-lit fairground and sees the hero range of Suzuki models (the Ignis, new Swift and Vitara) playfully showing off their many safety features in amongst the flashing lights of the dodgems arena. 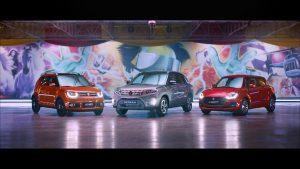 Skilfully swerving one another, the special features of each car are what prevent them from bumping into each other. One model spectacularly spins in doughnuts as another swiftly halts to a stop just inches from a concrete bumper. The speedy automotive action is set against a backdrop of a bustling funfair, spinning rides and bright flashing lights.

The Suzuki vehicles were shot on a purpose-built dodgems course in-studio with 10 stunt drivers, whilst footage of the busy funfair was captured in an exterior set. Post-production studio nineteentwenty were tasked with merging the footage of the two locations and adding the final flashing touches to the fair background and the sparking dodgems arena. 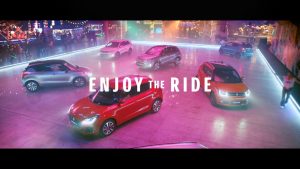 Duncan Horn, VFX Supervisor at nineteentwenty, explains: “The set was dressed with some fun fair lighting and rides already but we wanted to enhance the effect and add bigger background rides to make it feel like a busy fairground. We inserted elements shot at the exterior funfair into the interior studio background. To ensure continuity, we built a 3D map of the set and the landmarks that would surround the three open sides of the dodgems arena. The shots were all camera tracked around this space, so we were able to easily match each shot to the correct background landmarks.” 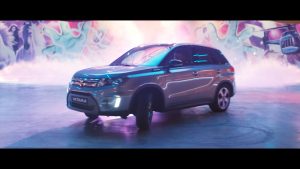 In addition to enhancing the background shots, nineteentwenty also added some final 2D and 3D touches to the arena itself.

Ducan adds: “The set wasn’t strong enough to hold the chicken wire roof that normally powers the dodgems arena, so we built this in, in post and added the trademark wire sparks as the cars whizz around. We also added smoke canons to the shot of the car doing donuts and various other elements.” 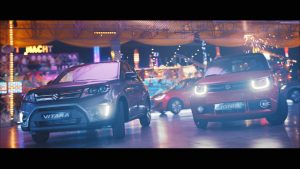 When working on the VFX nineteentwenty worked closely with Senior Colourist at Freefolk, Duncan Russell to seamlessly match the VFX and grade. Duncan Horn says: “It was great to work with Duncan at Freefolk. We’ve known each other for a long time, so we were able to share set-ups allowing us to bed in the visual effects in the right hues and brightness. The shots had a great colour to them on camera but Duncan’s grade really gave them the dazzling retro feel you get at a real funfair. It was great to be able to use his vision for the grade when working on the VFX.” 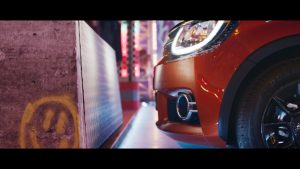 The week-long shoot involved 10 stunt drivers and a set-built dodgems arena, bringing to life the infectious fun of the fair, via unique, graceful stunt driving. Suzuki UK will be running a 60″ along with 30” and 10” cut-downs. Boosted by Sonz of a Loop De Loop Era’s “Far Out”, the TVC is a shot of energy and nostalgia that will resonate with consumers.

nineteentwenty Put the Flair into the Fair in Suzuki Dodgems Spot by Red Brick Road added by newsroom on January 9, 2018
View all posts by newsroom →