By newsroom on May 18, 2018Comments Off on Palms Casino Resort unveils “From Dust to Gold” campaign by AKQA

launches From Dust to Gold, an original marketing campaign designed to embrace the demolition of its storied past, to celebrate the collection of new venues opening and to build anticipation for the progress unfolding every day. 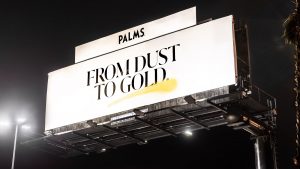 The multifaceted campaign presents the Palmsâ€™ vision of ushering in a new era of Las Vegas by destroying the old. With a collection of new restaurants and entertainment venues, completely remodelled casino floor and property-wide contemporary art program opening on May 17, the campaign is the first official property invite to both travellers and locals alike to finally come experience the beginning of what will be Las Vegasâ€™ most elevated destination. 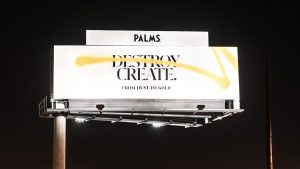 These exciting new venues will be joined by spectacular new nightlife and day-life concepts in partnership with Tao Group, as well as retail partnerships.

The $620 million multi-phased rmieagination of the property is celebrated in the creative, showcasing the dualities of both destruction and progress: to destroy is to progress. From Dust to Gold captures Palmsâ€™ contributions to Las Vegas as a leader in pop culture, food and entertainment, but also highlights its evolution by staking claim in new territories such as art and design.

Palmsâ€™ executive team and AKQA, Palmsâ€™ innovation and experience design agency of record, tapped director Paul Hunter to bring that vision to life. The Hollywood director drew from his experiences from works ranging from Notorious B.I.G.â€™s â€œHypnotizeâ€ (MTV Best Rap Video), to videos for Michael Jackson, Stevie Wonder, Madonna, U2, Justin Timberlake to most recently, his video for Pharrellâ€™s â€œFreedomâ€ (nominated for â€œBest Music Videoâ€ at the 58th Annual Grammy Awards) to create a dynamic piece of film. 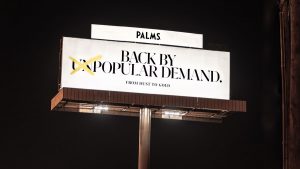 â€œWith the kickoff of our â€˜From Dust to Goldâ€™ campaign, we are giving a nod to our heritage, showing off everything that is shiny and new, and providing you a preview of the many incredible things to come at Palms,â€ said Jon Gray, General Manager of Palms.â€œTaking the vision we provided for the property, AKQA Portland and New York, along with Prettybird and Paul Hunter, have created a visual masterpiece that truly captures the evolution of our brand and inspires guests to come experience our completely reimagined property.â€

Conceptualised and created by AKQA Portland and New York, the From Dust to Gold campaign was further brought to life by Academy Award winning Swedish cinematographer, Linus Sandgreen, and famed street artist, REVOK.

The campaign is a truly integrated campaign, with a series of five online brand films, over one dozen social teasers and an immersive campaign microsite that highlights all of the new features and venues that are part of the renovation. In addition, a [:30] spot will run on local Las Vegas television and more than 90 different out-of-home placements can be seen in Las Vegas and the corridor to Los Angeles.

Palms Casino Resort unveils “From Dust to Gold” campaign by AKQA added by newsroom on May 18, 2018
View all posts by newsroom →