By newsroom on February 24, 2016Comments Off on Pro-cyclists Take on ‘Dirt vs Road’ in New Mercedes-Benz Campaign from AllTogetherNow

AllTogetherNow has created an atmospheric, documentary-style content campaign to celebrate the launch of Mercedes-Benz Vansâ€™ new Vito Sport model â€“ showcasing the versatility of the vehicle, which combines practical space with leading technology and comfort, enabling business use as well as an active lifestyle.

Shot in the countryside of Kent, the campaign follows road cyclist Barker as he tries down-hill mountain biking for the first time, taking on trails, jumps and chilling downhill dirt tracks at Penshurst Off-Road Cycling, in an attempt to match Dirt Wars Champion Brown at his sport. Barker then takes Brown to Yorkâ€™s Hill, one of the UKâ€™s ten steepest hills, for his first hill-climbing attempt, and the two try and break the five-minute, 27-second record for the hillâ€™s fastest ever ascent. 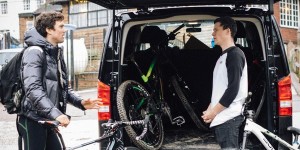 Daniel Evans, Creative Director at AllTogetherNow, said: â€œâ€˜Dirt vs Roadâ€™ is a great evolution of our previous extreme-sports content for Mercedes-Benz Vans. The unscripted narrative between Yanto and Daryl, and the juxtaposition of the two journeys they take together â€“ following each other out of their comfort zones â€“ is a beautifully authentic way of raising awareness of the versatility of the new Vito Sport.â€

Pro-cyclists Take on ‘Dirt vs Road’ in New Mercedes-Benz Campaign from AllTogetherNow added by newsroom on February 24, 2016
View all posts by newsroom →