By newsroom on September 26, 2017Comments Off on Rock Hound creates ‘2 Wheels vs Gravity’ in record time for Shell ADVANCE

Rock Hound, Producer, James McLaughlin says: “Shell ADVANCE, ‘2 Wheels Vs Gravity’ began with a clear vision, a contest between man and machine, a Ducati Superbike against a skydiver, and so we were able to build our creative approach around this, building a piece of content that was dramatic, exciting and visually stunning. Having Shell ADVANCE as Ducati’s technical partner provided the perfect foundation for this epic stunt. 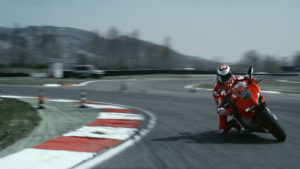 Bringing this to fruition provided challenge and reward throughout the creative development and production. Shooting this whole spot in 12 hours meant it needed to be storyboarded and planned meticulously in pre-production, with a clear mind towards the finished image. Being part of Smoke & Mirrors allowed us to involve the post production team from the outset and create a streamlined production from creative to delivery.”

Crunch Communications, Director, David Wylie says, “Working to a specific and clear brief from the Global Shell ADVANCE client, the team at Crunch developed an exciting concept to showcase the role engine lubricant plays in the performance of the Ducati Superbike. Smoke & Mirrors along with Rock Hound proved to be the ideal partners to bring this concept to life in a credible way, working under tight restrictions and short deadlines. The film’s popularity amongst the Shell ADVANCE and Ducati community around the world has proven the approach has been a fantastic success.”

Rock Hound creates ‘2 Wheels vs Gravity’ in record time for Shell ADVANCE added by newsroom on September 26, 2017
View all posts by newsroom →