By newsroom on April 20, 2016Comments Off on Shazam Announces a New Initiative Built for Advertisers: Shazam for Brands

Shazam, the world’s most popular app for connecting artists and fans, announced the launch of Shazam for Brands. Shazam is known by consumers as the standard in music recognition, and will now unite brands with its global audience.

The company is an ecosystem of hundreds of millions of global users, all of them making a personal connection to content through the app. As a result, Shazam’s credibility within the music industry is born out of the fact that its hand-­raising data influences radio plays, music sales and streaming revenue for artists. Shazam users are passionate, active, engaged and in abundance ­ in over 190 countries at home, bars, stores and stadiums, Shazaming where brands already exist. Brands can now leverage data-­driven storytelling to produce their own content.

“We are launching Shazam for Brands because we believe Shazam is uniquely positioned to become the default platform for connecting the mobile world with the real world,” said Greg Glenday, Chief Revenue Officer, Shazam. “This began with music identification, and has allowed us to be the first to occupy invaluable real estate on smartphones around the world. The launch introduces new technology and content tools for brands to utilise data and engagement in a way defined by the very audiences they seek.”

Earlier this month, Coca ­Cola launched its “Share a Coke and a Song” campaign, which uses the first ­ever Shazam­-enabled bottles. When consumers scan lyrics on specially marked bottles and signage, they can record a digital lip-­sync video and share their creations on social media with the hashtag #ShareaCoke.

Shazam for Brands will also be the official music partner of the 2016 Cannes Lions, the eight­-day consortium of creative inspiration, advertising, celebration, education and networking, attracting over 15,000 delegates from around 100 countries. At Cannes, our advertising and business development teams will highlight how Shazam humanises the brand experience.

“In the year that we launch Lions Entertainment, we’re delighted to have Shazam on board as a partner,” said Philip Thomas, CEO, Lions Festivals. “Their ‘Sound of Cannes’ activation is set to be an exciting showcase of Shazam for Brands and we’re looking forward to putting this in front of the Cannes Lions delegation which is made up of the entire creative communications ecosystem.” 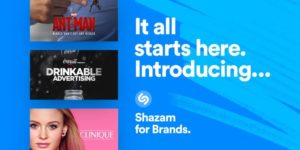 Shazam for Brands creates a seamless engagement from the time consumers Shazam up to the moment they receive a result. The new offering creates new specific ad units customized for brands, and it will launch with a core toolset to help advertisers engage audiences, including:

Shazam for Brands will launch with invitation­-only events on April 20, 2016, in New York City and London featuring special musical guests.

Shazam Announces a New Initiative Built for Advertisers: Shazam for Brands added by newsroom on April 20, 2016
View all posts by newsroom →