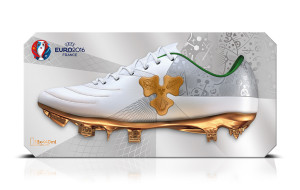 Following design agency Taxi Studio’s global redesign of the Carlsberg brand, the studio was tasked with creating a football-themed Limited Edition packaging design to celebrate UEFA Euro 2016 in France, and Carlsberg Export’s association with it.

Taxi Studio’s brief was to remain consistent with the wider Carlsberg look and feel, but specifically, they were asked to help Carlsberg Export make a real impact on-shelf during the tournament. By appointment to the Royal Danish Court, Carlsberg Export is a pale blonde Danish pilsner style lager with a refined and satisfying taste.

Spencer Buck, Creative Partner & Founder at Taxi Studio explains the thinking behind the strategy: “Translating the UEFA Euro 2016 football tournament to brand packaging is a well-trodden path… so from the outset we were determined to find an original expression, avoiding the obvious football clichés. Carlsberg Export is a premium beer, so it demanded a sophisticated, original and witty idea.”

Jonathan Turner-Rogers, Associate Creative Director at Taxi Studio elaborates: “When we presented our idea ‘The Bootiful Game’, complete with stud detailing containing well-known French landmarks, it was a ‘back of the net’ moment. To boot, the boot is the most premium, crafted bit of football kit in the player’s locker room – providing a subtle, yet suitable link to Carlsberg Export’s more premium, crafted credentials.”

Lynsey Woods, Senior Brand Manager for Carlsberg UK, said: “We are very proud of our great tasting Carlsberg Export and our sponsorship of UEFA Euro 2016. This clever design brings all of that together beautifully. I love the celebration of Paris, crafted in fine and subtle detail in the studs. We think that Taxi has done a super job – and we hope the fans love it!”