By newsroom on November 2, 2017Comments Off on Vodafone Ireland Launches New Team Of Us Campaign Ahead of the Guinness Series

Vodafone Ireland today launched “Who We Are is How We Play” the next phase of the brand’s “Team Of Us” sponsorship of the Irish rugby team.

Vodafone and award-winning agency Target McConnells developed the “Team Of Us” platform with the aim of creating the most interconnected team and fanbase on the planet. Now, in year two of their partnership with Irish Rugby, Vodafone is giving fans a rare glimpse into the childhoods of Conor Murray, Rory Best, Tiernan O’Halloran and Tadhg Furlong and their journey to becoming Irish players.

The campaign launches with a short film on Vodafone Ireland’s social channels and a 60 second spot that aired on TV from November 1st.

Vodafone Ireland Head of Brand and Communications, Anne Mulcahy said “Vodafone is all about connecting people and our ambition is to help Irish rugby fans get closer to the team and build the most interconnected fan base on the planet through the #TeamOfUs platform. 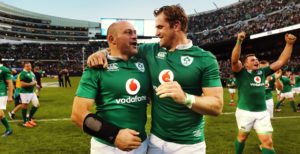 “The focus of the “Who We Are is How We Play” is the real, regular people behind the players’ on pitch personas. While they may be capable of extraordinary feats when they put on an Irish rugby jersey, they have had upbringings and experiences that every Irish person can relate to – whether it’s your mother telling you for the fifth time to come in for your tea or memories of going to your first match with your dad. It was important for us to share these moments with Irish rugby fans and connect them with the players on a more personal level, because ultimately you shout louder for someone you know”. 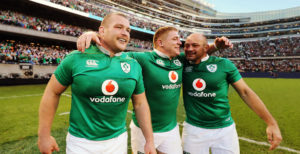 Commenting on the campaign, Target McConnells Joint Creative Director Karl Waters said, “Almost every scene you’ll see in this ad is based on an actual event in the players’ lives. The scene that shows Conor at one of his first rugby matches, came from an anecdote that Conor himself gave us. The same goes for Tadhg Furlong getting his first call up while helping in his dad on the family farm in Wexford. Tiernan O’Halloran playing Jonah Lomu Rugby with his sister and Rory Best playing for his local club, Banbridge RFC. 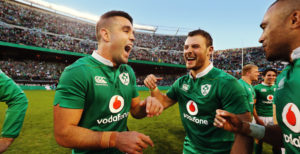 “All the scenarios are inspired by real stories that have shaped the players and even some of their family members have cameos with Tadhg Furlong’s dad James and Conor Murray’s dad Gerry both playing themselves”.

The through-the-line campaign, including TV, digital, OOH, retail and social media will run for 4 weeks. Vodafone will be bringing fans closer to the Irish Rugby team via social content, ticket competitions and exclusive, instant match highlights for all of Ireland’s international matches on the My Vodafone App. Check out the Vodafone Ireland Facebook page for all the latest #TeamOfUs news.

Vodafone Ireland Launches New Team Of Us Campaign Ahead of the Guinness Series added by newsroom on November 2, 2017
View all posts by newsroom →