By newsroom on October 17, 2018Comments Off on All-drone shot film for OverAndAboveAfrica highlights the poaching threat to animal collectives

What is the collective noun for a group of drones? A flock? A watch? A sentinel? A guardian as it turns out. Today sees the launch of ‘A Guardian’ – a glorious drone-shot film for charity OverAndAboveAfrica, using collective nouns to romance the beauty of animal groups across Africa. But at the same time highlighting their vulnerability to poaching gangs.

The genre of animal collective nouns act as the narrative thread in this emotional rollercoaster of a film for Los Angeles–based OverAndAboveAfrica, a charity that raises funds to support people and organisations in Africa who are actively preventing extinction. 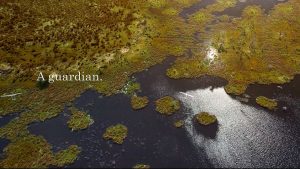 A 90-second, drone-shot film is leading the charity’s initiative to supply drones to game reserves to help them win the war against poaching. Drone surveillance is proving to be a saviour for Africa’s endangered animal groups, increasing their survival chances by up to 80%, according to a pioneering group of conservationists, entrepreneurs and researchers called Air Shepherd.

The film is made by an international team of creatives led by former Wieden+Kennedy, 180 Amsterdam and DDB veteran, Andy Fackrell, who has recently left LA to return to Amsterdam. The film is thoughtfully directed by another ex-180 Amsterdam creative, Sam Coleman at Giant Films in Cape Town.

From dawn to dusk, the film presents a series of swooping aerial shots of animal groups, each titled with the respective collective nouns – a pride of lions, a wobble of ostrich, an implausibility of gnu, etc. – before tracking ‘a gang’ of poachers on the drone’s night vision camera.

A recent report states that 83% of wild mammals have been lost to human civilisation; yet we make up just 0.01% of the Earth’s biomass. With African elephant numbers dropping 9% per year, it’s a battle that has become a crisis, starkly evidenced by the slaughter of 90 elephants over the last two months in Botswana. 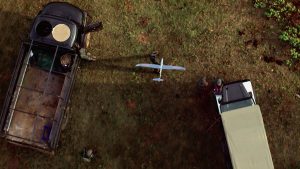 “It’s a slaughter,” says OverAndAboveAfrica founder Kerry David. “Every day is a tech-war between heavily armed, well organised, skilled poachers and our courageous, but often ill-equipped rangers. Dropping our guard can mean the loss of whole herds.”

Says Fackrell, on working with director Sam Coleman, “This is such an issue – economic, as well as emotional – Sam had no problem convincing Cape Town’s industry to get behind it, as my old colleague Shannon Worley did with RPS in LA.”

“We’re also very appreciative for Sony Music Italy on their generosity with the track,” added Fackrell.

For now, drone technology has become the surprising guardian in the race to save animal lives across Africa.

All-drone shot film for OverAndAboveAfrica highlights the poaching threat to animal collectives added by newsroom on October 17, 2018
View all posts by newsroom →