By newsroom on March 3, 2016Comments Off on American Express helps launch mobile game that encourages players to take care of national parks

The National Park Service is celebrating its 100th birthday this year, and as of late has been rolling out a number of ads and marketing stunts to raise awareness of the milestone, including a virtual park tour and campaign created by Grey called ‘Find Your Park.’

The US agency’s latest centennial initiative is a mobile game called ‘Save the Park’ that was created in partnership with American Express and non-profit Games for Change. 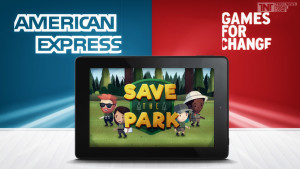 ‘Save the Park’ was created through a $250,000 grant from American Express, and the company will make a $1 donation to the National Park Foundation for every download of the game that occurs this year, up to $50,000.