The advertising watchdog has banned a TV ad for Beats Pill speakers featuring the singer Robin Thicke from being broadcast before 7.30pm following almost 100 complaints from viewers who believed the spot was “offensive” and “sexist”.

The spot features Thicke performing his single ’Blurred Lines’ alongside three female models in hot pants and see-through nurse uniforms, posing with the speakers in what ad clearance body Clearcast described as “playful” and “comic” ways.

Complainants said the ad objectified women and questioned whether it should have been broadcast during a time when children could be watching, due to its “overtly sexual” nature. 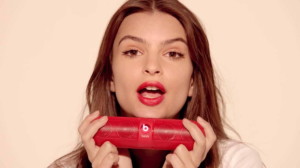 Others said they believed the models were irresponsibly thin.

While the Advertising Standards Authority did consider that sections of the Hogarth Worldwide-created spot were sexually suggestive, with women posing in provocative positions, the only complaint that the watchdog upheld was about the time it was broadcast.

Both Beats and Clearcast argued that the TV spot was only “mildly” sexual in nature. They said they believed children would not understand the “mild innuendo” associated with the shape and use of the product as shown.

One scene in the ad shows the models lifting the large pill-shaped speakers as if they were dumbbells while in another scene one of the performers is shown holding the speakers in a hotdog bun.

Clearcast denied that the women in the spot were “irresponsibly thin”.  The ASA said that while one scene showed the models wearing see-through nurse outfits, the costumes were intended as a comical pun on the word “pill” and the outfits were worn over crop tops and pants, playing down the sexual nature of the scene.

Beats Electronics International argued that the ad, based on the original music video for Thicke’s ‘Blurred Lines’, was not intended to be offensive or to encourage any inappropriate stereotypes.