By newsroom on March 13, 2018Comments Off on Cookie Studio Crafts an Enchanted Secret Garden for Fitbit Mother’s Day Ad

Fitbit launch ‘Mother’s Day 3D World’ a 20-second animated film directed and animated by Cookie Studio. The film takes viewers on an excursion through a spring-time world of blooming flowers, kettlebells and yoga mats to promote its fitness watches for Mother’s Day. 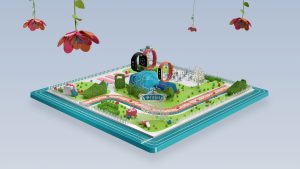 The animated dimension is the second iteration for Fitbit created by London-based Cookie Studio, following a winter wonderland execution for Christmas.

Creative Director at Cookie Studio, Thiago Maia comments: “We were tasked with creating a magical, enchanted garden for this world that would incorporate sports and fitness, to appeal to the Mother’s Day consumer. The sports we chose attract young mums but they are also about endurance, strength and commitment. These are all qualities we see in mothers and that is part of what we are celebrating on Mother’s Day.” 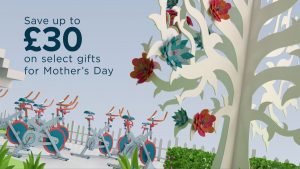 In order to adapt the Fitbit world for this occasion, it was important that the design and palette were consistent with Fitbits brand colours, but clearly marked a change in season from the winter world.

“We kept the main space the same, the podiums, the running track, treadmill and stairs but we amended the details. We swapped the snowboarding half pipe for spinning bikes and the ice rink for yoga mats.  We traded the Xmas decorations for a spring, floral theme throughout, whilst changing the colour scheme to incorporate this. One of the hurdles was trying to evoke the springtime without using too much green. We think we found a perfect balance between the greens and the Fitbit brand colours,” adds Thiago.