By newsroom on January 3, 2018Comments Off on Boys and Girls and Cookie Studio Create a Festive Fitness Wonderland for Fitbit’s Christmas Ad 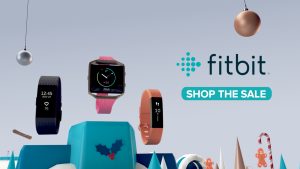 In the film, viewers make pitstop visits at an array of festive activities. Crafted in 3D by Cookie Studios, sporting spaces include an ice-skating rink and a snowboarding trick ramp. In the enveloping animation each zone is playfully embellished with polished festive decorations including gingerbread figures, candy canes and sprightly snowmen to complete the seasonal elements. The tour makes its grand finale at central podiums displaying three Fitbit products.

To create the film, Cookie Studio worked closely with creative agency, Boys and Girls, to identify the essential holiday elements and activities to feature in each of the Christmas zones. Cookie Studio then executed the entire animation and design for the bespoke three-dimensional world for Fitbit. 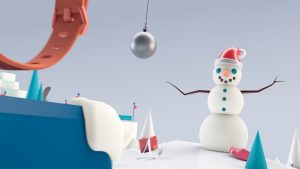 Thiago Maia, Creative Director at Cookie Studios says: “We collaborated on a joint vision to determine which features would be included in the 3D world. Once decided, it was important to get the camera journey right. The route had to reflect the message, so we visited particular winter sporting zones to emulate a festive tone before finishing at the Fitbit podiums.”

Cookie Studio crafted the space and added key festive and fitness details before compositing into the enchanting Christmas landscape. The animation production studio combined its characteristically colourful and buoyant style with smooth metallic finishes and coated veneers to reflect the Fitbit brand. The brand’s colour palette was applied to all elements of the ad and the Fitbit product animations were also exclusively modelled, textured and rendered by the studio to reflect their real-life counterparts. 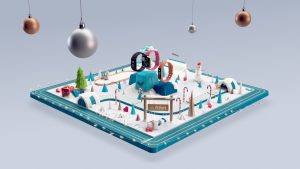 On creating the entirely bespoke animation, Thierry Levy, producer at Cookie Studios explains: “We worked on a precise creative and ensured there was zero margin for error. It was incredibly rewarding to work closely with Boys and Girls. Ultimately, we created something that the client, and ourselves, are very proud of.”

The sweeping tour of the athletic winter wonderland forms the first in a series of animated provinces that Fitbit will redesign for future iterations. Fitbit will continue to create unique realms to reflect key holidays and seasonal events.

Boys and Girls and Cookie Studio Create a Festive Fitness Wonderland for Fitbit’s Christmas Ad added by newsroom on January 3, 2018
View all posts by newsroom →