By newsroom on November 3, 2015Comments Off on Crack + Cider launches the world’s first concept store dedicated to helping the homeless 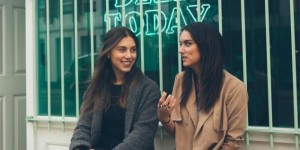 A retail space in Hackney which will allow customers to buy products for the homeless for Christmas is set to launch in November, 2015.

Crack and Cider is a world first, and was devised by Scarlett Montanaro, a creative at AnalogFolk and strategist Charlotte Cramer (currently at Vice).

The brand takes its name from a conversation the founders had with a rough sleeper, who claimed: “People don’t give me money because they just think I’ll spend it on crack and cider.”

In return for a cup of coffee, shoppers will be able to purchase outdoor equipment and waterproof clothing for those without a roof over their head, including umbrellas, fleece jumpers and gloves.

The founders have said that the concept was born out of the desire to give shoppers a more personal connection to the cause.

Commenting on the project, Stephen Robertson, chief executive of the Big Issue Foundation said: “This initiative gives people an opportunity to take some direct action to help rough sleepers at the crisis
point that is rough sleeping.”

The store will be launching inside the One Good Deed Today space with an event that aims to openly discuss how communities can improve the lives of their homeless neighbours with a panel of four prominent speakers such as Robertson and award-winning architect James Furzer who has featured in the news recently for his homeless pods.

Kensigton and Chelsea council came under fire from residents in August for a series of anti-begging posters which urged the public not to ‘contribute to a person’s death’ by giving them cash.

Crack + Cider launches the world’s first concept store dedicated to helping the homeless added by newsroom on November 3, 2015
View all posts by newsroom →