By newsroom on May 21, 2013Comments Off on Flickr launches new site design 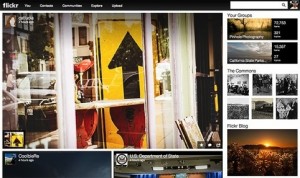 She adds, ‘We hope you’ll agree that we have made huge strides to make Flickr awesome again.’

The new site is built around a revamped photostream that shows users uploads, as well as comments and uploads from their friends, in what Flickr describes as ‘a seamless layout’.

The photostream forms the Flickr homepage, and allows users to monitor their own and their friends’ uploads and activity.

Flickr is also introducing a new slideshow option, which can display full-screen images.

Each registered Flickr users is being given a terabyte of space for free (equivalent to around 600 000 6 megapixel photos) and Flickr will now accept video uploads of up to three minutes.

Flickr launches new site design added by newsroom on May 21, 2013
View all posts by newsroom →