By newsroom on February 19, 2018Comments Off on GB recruitment still in the dark ages as employers continue to ignore rights of pregnant women and new mothers 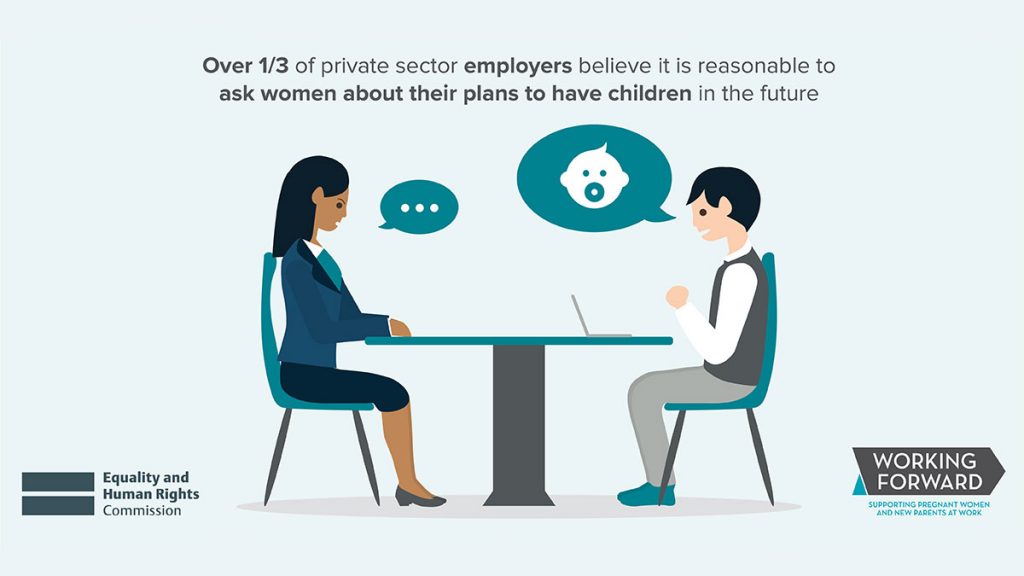 British employers are “living in the dark ages” and have worrying attitudes towards unlawful behaviour when it comes to recruiting women, new statistics from the Equality and Human Rights Commission (EHRC) reveal.

Showing that many businesses’ attitudes are decades behind the law, the survey of 1,106 senior decision makers in business, found around a third (36%) of private sector employers agree that it is reasonable to ask women about their plans to have children in the future during recruitment.

Conducted by YouGov on behalf of the EHRC, the survey was commissioned to understand managers’ attitudes around pregnancy and maternity discrimination.

Looking beyond antiquated recruitment beliefs, the survey also found that when it comes to maternity discrimination in the workplace, 44% of employers agree that women should work for an organisation for at least a year before deciding to have children.

What’s more, the same number agree that women who have had more than one pregnancy while in the same job, can be a “burden” to their team. 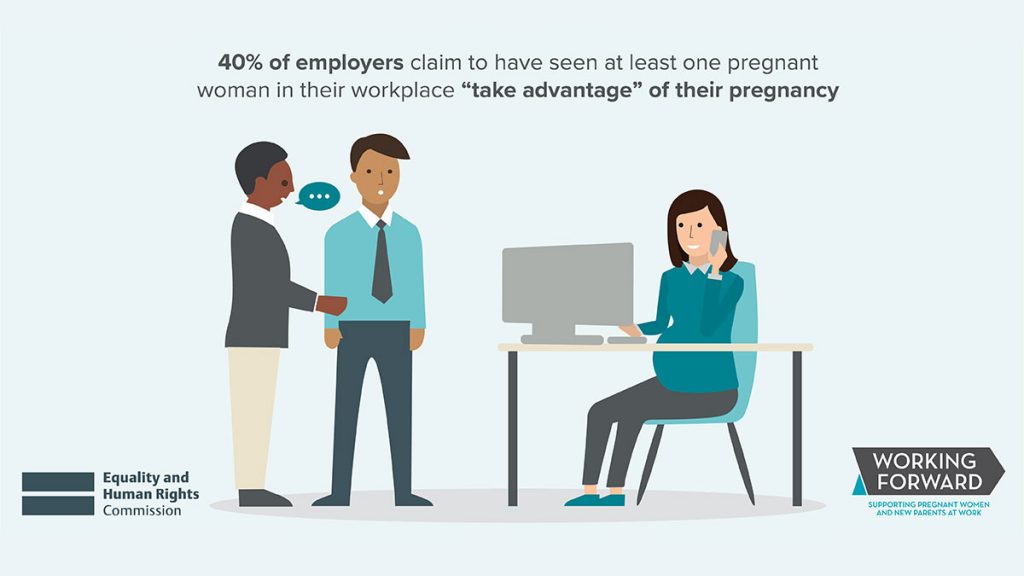 In fact, 40% of employers claim to have seen at least one pregnant woman in their workplace “take advantage” of their pregnancy, whilst around a third believe that women who become pregnant and new mothers in work are “generally less interested in career progression” when compared to other employees in their company.

Financially, four in ten (41%) employers agreed that pregnancy in the workplace puts “an unnecessary cost burden” on the workplace.

The EHRC is calling on employers to put a stake in the ground to eliminate these attitudes and more importantly, pregnancy and maternity discrimination in the workplace for good. This can be achieved by employing best practice and joining the Working Forward initiative to improve business practices and make British businesses the best they can be for pregnant women and new parents.

Rebecca Hilsenrath, Chief Executive of the Equality and Human Rights Commission, said: “It is a depressing reality that, when it comes the rights of pregnant woman and new mothers in the workplace, we are still living in the dark ages. We should all know very well that it is against the
law not to appoint a woman because she is pregnant or might become pregnant. Yet we also know women routinely get asked questions around family planning in interviews. It’s clear that many employers need more support to better understand the basics of discrimination law and the rights of pregnant women and new mothers. Working Forward provides this support. We need more businesses to join. Work with us if you are interested in a better deal for women in the workplace.” 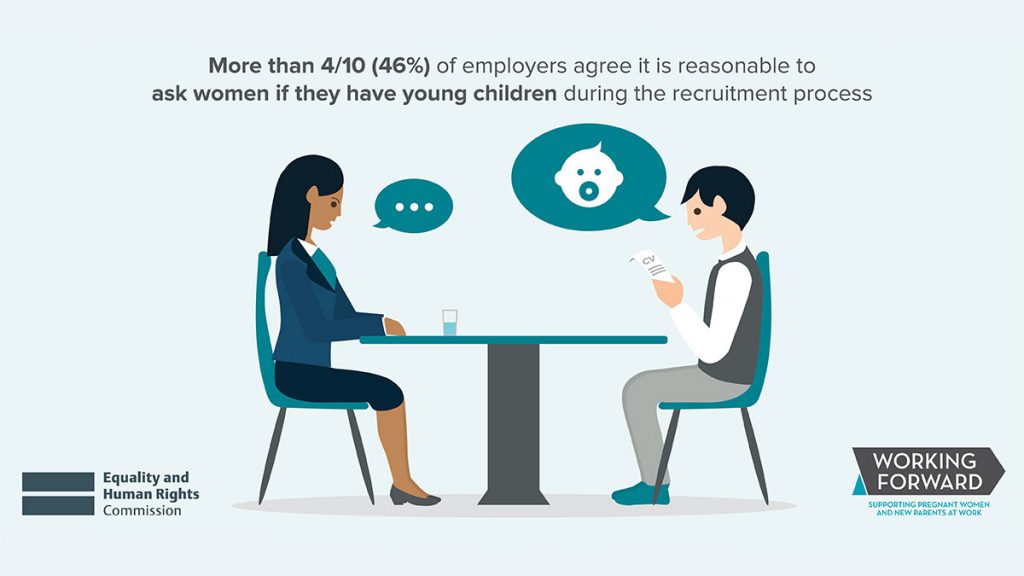 Sarah, a mother of two young children who was made redundant during maternity leave for her first child, explains: “It’s sad to think that things like this are still happening. I feel angry all the time that you can be a mother with young children and unless you’re in a job that protects you, your whole world can come tumbling down – out of your control. It is essential for employers to be honest and ensure there is good communication between them and those on maternity leave so that pregnant women and new mothers are given the support they deserve.”

While there is a clear need for change in employer perceptions, the poll also highlighted that employers are struggling to provide pregnant women and new mothers with the support they need.

Half (51%) of employers agree that there is sometimes resentment amongst employees towards women who are pregnant or on maternity leave. Furthermore, around a third (36%) of employers disagree that it is easy to protect expectant or new mothers from discrimination in the workplace.

The Working Forward campaign asks businesses to commit to taking action on at least two of the three action areas in addition to leadership: employee confidence, supporting line managers and flexible working. It also provides employers with advice, guidance and resources to deliver on their pledges. Current members include Nationwide, Royal Mail, Transport for London, and many more.

Julie McCarthy, Equality Diversity & Inclusion Manager at Nationwide Building Society says: “We want to build an agile, talented and diverse workforce, which reflects our equally diverse membership, and society as a whole. Maternity related policies are an integral part of this. As a result of the Working Forward initiative we have seen some incredibly positive results across the society with regards to employees striking a better balance between their work and their personal lives.”

Ben Willmott, Head of Public Policy at the CIPD, the professional body for HR and people development, said: “These findings show that there are still far too many employers who don’t understand or respect employment law as it relates to pregnant women and new mothers. Discrimination not only disadvantages individuals, but also means that employers themselves are missing out on attracting and retaining female talent. Much more needs to be done to help organisations improve their people management practices, particularly smaller firms, given the most negative attitudes to pregnancy and maternity in the survey are among those with 250 or fewer employees. Investment in manager capability is essential to challenge unlawful, short-sighted and unethical practice.”

The release of the new statistics coincides with a roundtable event hosted February 19 by the Equality and Human Rights Commission, focusing on women in the workplace.

The event, which will see discussion around topical issues including the gender pay gap and pay reporting, as well as sexual harassment in the workplace, is one of a series held during the course of the EHRC’s 10th anniversary year.

GB recruitment still in the dark ages as employers continue to ignore rights of pregnant women and new mothers added by newsroom on February 19, 2018
View all posts by newsroom →