By newsroom on February 29, 2016Comments Off on Jeep announced as executive car partner of Batman v Superman: Dawn of Justice 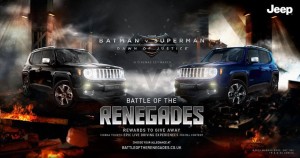 The link-up with Warner Bros. Pictures kicked off during production, when Jeep’s Renegade SUV model, which features the best off-road capabilities in its category, was deployed through the streets of Metropolis with Bruce Wayne, aka Batman, at the wheel for a key scene in the film. 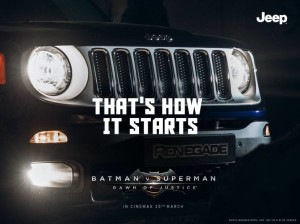 To maximise excitement for the film, Jeep UK is now launching an innovative online experience and advertising campaign, created in collaboration with the filmmakers. Prior to the release of Batman v Superman: Dawn of Justice, fans can get a sneak peek at previously unseen vehicle footage provided to Jeep UK in a special trailer only viewable as part of the online experience.

The ‘Battle of the Renegades’ interactive experience is created and led by World of Initials with Brave Spark Media supporting. It is available at the dedicated website in the run up to the film’s release. 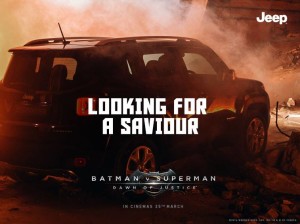 In Batman v Superman: Dawn of Justice, the world’s most iconic Super Heroes clash for the first time ever on the big screen. Jeep’s online experience invites users to choose their allegiance and become a hero themselves in the ‘Battle of the Renegades’ by using the Jeep Renegade to help others and evade impending catastrophe.

Participation in this interactive online experience will be rewarded with a range of prizes, including live themed driving experiences and cinema tickets to Batman v Superman: Dawn of Justice, as well as a range of other related digital content. 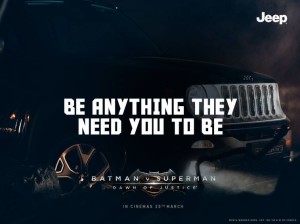 “To be involved with these two ultimate Super Heroes, Batman and Superman, is a very exciting moment for Jeep,” Damien Dally, head of brand, Jeep UK said. “This partnership not only showcases the Renegade’s off-road capabilities and why it’s such as success in the UK, but also aligns with our brand values of enabling people to go anywhere and do anything.”

Rachel Bateman, Head of Live Engagement at World of Initials, said: “Jeep’s partnership with Batman v Superman: Dawn of Justice was an exciting opportunity for us to create a unique brand experience that would engage a broad audience base. 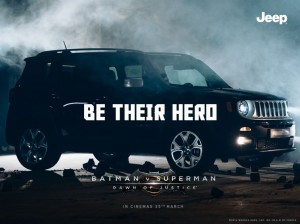 The interactive experience invites the viewer to become a hero and help people evade impending catastrophe by defeating obstacles, explosions and rough terrain with the help of a Jeep Renegade.”

Jeep announced as executive car partner of Batman v Superman: Dawn of Justice added by newsroom on February 29, 2016
View all posts by newsroom →