By newsroom on May 18, 2018Comments Off on Jequiti and BETC São Paulo’s invisible make up help women in job interviews

Everybody says that the right make-up is one of the most important things for a woman in a job interview. But, what if one of the Brazil’s most popular make-up brands just said the opposite? Jequiti did that.

Studies show that the Brazilian economic crisis has generated devastating consequences to the Brazilian workers. According to the Brazilian Institute of Geography and Statistics (IBGE), from 2017 to February 2018, more than 10 million Brazilians were unemployed. However, women represent more than a half of this number – turning this scenario into another proof of gender inequality.

The pursue of job relocation profoundly affects women’s self-esteem. To help solving this problem, and also taking advantage of the International Labour day, Jequiti presented “The Invisible Make Up” – a campaign created by BETC São Paulo.

The idea was to create a way to strengthen these women’s self-confidence during job interviews. How? Using the “placebo” effect.

“Many woman wear make up as a tool to empower themselves. But when a woman feels beautiful, powerful and confident, she realizes she only needs herself to overcome an obstacle” says Monica Gregori, Jequiti Marketing Director. 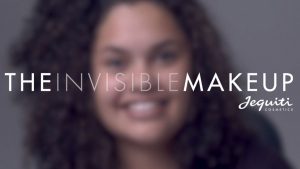 “Make up becomes just a trigger to activate the woman power, and comes up just as an extra element in this story. Everything a woman needs she already has. It’s this message that we want to communicate with this campaign”, says BETC São Paulo Communications Director, Camila Nakagawa.

Jequiti invited Mappit – one of the biggest Brazilian recruiter companies – to assist on the selection of women who were actually looking for job reallocation. The selected participants were Tamires Oliveira (25) and Leticia Franco (22). Both wear make up every day – even for basic occasions, such as going to the supermarket – and also have been looking for work opportunities since 2017.

In order to be ready and confident for their next interview, Tamires and Leticia received a special invitation: to have a professional make up session before the meeting, under the condition of not looking at the mirror at any moments.

The result: both achieved excellent performance during their job interviews. But the most surprising was still to come: after the appointments, both noticed they were not wearing any make up at all.  And to those who question why a make up brand decided to advise against its own products, Jequiti’s campaign tagline answers: “You just need yourself. But if you need us, we are here”.

Jequiti and BETC São Paulo’s invisible make up help women in job interviews added by newsroom on May 18, 2018
View all posts by newsroom →