By newsroom on January 4, 2016Comments Off on John Cleese Bashes His Fawlty Car in Latest Specsavers Spot

Reprising his iconic role as the irascible Basil Fawlty, the TV commercial sees John Cleese recreate one of Fawlty Towersâ€™ most famous scenes. The comic legend gets into an argument with his carâ€™s automated voice control and so decides to give it a â€˜damned good thrashingâ€™. But the classic sketch has an extra twist at the end and, of course, he shouldâ€™ve gone to Specsavers.

Specsavers Creative chose to develop the idea around Basil Fawlty because heâ€™s an iconic British character who resonates deeply with the key target demographic, while also appealing widely to younger customers. The team worked closely with John Cleese throughout the entire project, including on script development. 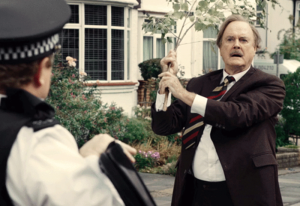 The campaign will be amplified digitally by a behind-the-scenes interview with John Cleese, hosted across Specsaversâ€™ social channels. In the clip, Cleese talks about Fawlty Towers, the original car-thrashing scene and why he chose to work with Specsavers. Additionally, the campaign will run the #shouldve hashtag to gather all â€˜Shouldâ€™veâ€™ content in one place.

Specsaversâ€™ Marketing Director, Richard Holmes, said: â€œIt is getting harder and harder to achieve real cut though in any media. John Cleese is one of the towering figures of comedy and we are confident that bringing Basil Fawlty back to our screens will resonate hugely with our key audiences.â€

Specsaversâ€™ Creative Director, Graham Daldry, said: â€œWe realised that bringing back Basil Fawlty would have relevance for our brand some time ago, and we were delighted that John Cleese was so positive about working with us. We believe that the outcome succeeds in revisiting one of the most memorable moments in British comedy in a way that is essentially Specsavers.â€

John Cleese Bashes His Fawlty Car in Latest Specsavers Spot added by newsroom on January 4, 2016
View all posts by newsroom →