M&C Saatchi Launches ‘Breakfast on the Slow’ with Dorset Cereals

By newsroom on February 19, 2018Comments Off on M&C Saatchi Launches ‘Breakfast on the Slow’ with Dorset Cereals

M&C Saatchi London has unveiled an integrated campaign for Dorset Cereals targeting young urban families and encouraging them to slow down for breakfast.

The 30 second ad is set in a kitchen, with a women talking to the camera about how breakfast has evolved into something we have on the go, or miss altogether. The ad continues in slow motion ending with the idea of taking the ‘fast’ out of breakfast.

Justin Tindall, Chief Creative Officer at M&C Saatchi said: “We’re thrilled to be working with Dorset Cereals. It’s a brand that shares our creative ambition and we’re excited to launch them into the next stage of their journey.”

The online film will spearhead the campaign with subsequent ongoing engagement planned through social-led competitions, along with influencer activity and experiential activation to further engage with parents. 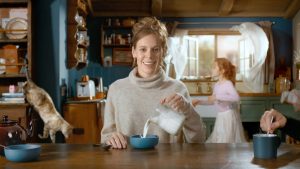 M&C Saatchi Launches ‘Breakfast on the Slow’ with Dorset Cereals added by newsroom on February 19, 2018
View all posts by newsroom →