By newsroom on January 15, 2016Comments Off on Microsoft Updates Bing Logo as Search Service Grows Up

Microsoft on January 14 introduced a new version of the logo for Bing, the No. 2 search engine, switching to green from yellow and putting the “b” in upper case. The changes come partly because the green “is easier to see over yellow,” a Microsoft spokeswoman said, and because the new look displays well “across Windows devices and services.”

The new logo comes as Microsoft says Bing has reached a new plane. It remains a distant rival to Google, but became profitable last year.

“We expect Bing to continue to grow and are thrilled with our trajectory,” said Rik van der Kooi, Microsoft’s corporate VP of advertiser and publisher solutions. “We are the only search engine that is experiencing steady, consistent growth and have increased our share for 26 consecutive quarters. And we’re not slowing down.”

With about two weeks before Microsoft’s next quarterly earnings report, Mr. van der Kooi added that the company is “all in on search.” It is looking to expand Bing through a number of different vehicles, the largest of which is the company’s Windows 10 operating system. More than 200 million people have downloaded Windows 10 since it debuted in July, Mr. van der Kooi said, with Microsoft aiming to have 1 billion users by 2019. Windows 10 and its Edge browser use Bing as the default search engine.

Bing also powers devices like Apple’s Siri, Amazon’s Alexa and since Jan. 1, all of AOL’s search engine properties, as well as other devices.

Excluding traffic acquisition costs, search advertising revenue for Bing grew 29% in 2015. “Seven years later and this business has really transformed itself,” he said. “Search is not tied to a search box anymore.” 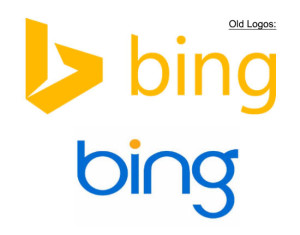 Bing, which has about a 21% market share in the search category, brought Microsoft more than $1 billion in revenue last quarter.

Still, Google continues to hold marketers’ attention with its 64% market share, according to ComScore. Mr. van der Kooi argued that companies can sell 30% more product by advertising on both Google and Bing. Some of the search engine’s biggest customers include AT&T, Home Depot and Comcast.

“Of course we understand that marketers think about Google first,” Mr. van der Kooi said. “They have the biggest market share. But one-third of all search queries are done through Bing.”

Microsoft Updates Bing Logo as Search Service Grows Up added by newsroom on January 15, 2016
View all posts by newsroom →