By newsroom on April 18, 2016Comments Off on Mitsubishi Motors Presents Optical Challenge in Latest Series of Channel 4 Idents

Mitsubishi Motors have utilised ENVY Advertising’s expertise to create a new set of idents for Channel 4, celebrating the pioneering and innovative spirit of the broadcaster’s documentaries.

Under the tagline ‘Changing perceptions with documentaries on Channel 4’, each ident presents an optical illusion, encouraging viewers to approach the concept from a new angle by looking closer at the details of what they’re being shown. 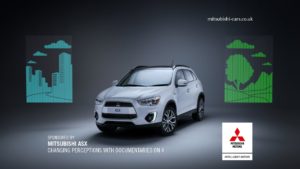 ENVY Advertising was tasked with bringing the creative vision of Golley Slater Cardiff and Joyrider Films to life by animating the entirety of the idents.

Jocelyn Silburne, Producer, explains: “The brief outlined that the entire environment within the idents (apart from the car) would be created in CG, requiring detailed preliminary stages to ensure the optical illusions the director wanted to create were convincing, and looked like they had been shot in camera. The series called for considerable and comprehensive CGI input, and a detailed pre visualisation phase was crucial to ensure that the illusions had a smooth and realistic appearance, faithful to Matt’s vision.”

On the 3D work, 3D Artist Erik Pronk explains: “We worked very closely with Matt across all stages of planning to create each illusion. Technical visualisation of each ident was used on set to create each camera movement, which was used as an overlay to capture the motion control for each car.”

Caspian Graca da Silva, 3D Artist, adds: “The lenticular illusion for ASX was particularly challenging in both the pre visualisation stage and for the final render as the perspective was difficult to get right – any slight change to the camera threw everything off, so precision was key in locking down the look.” 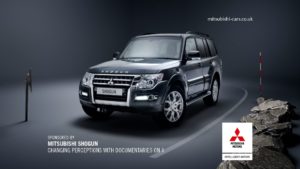 Matt Westrup, Director, comments: “Each illusion was to be created in 3D but designed as if it could be built and shot in camera, meaning that there couldn’t be any CG cheats to fake the effect of the illusions. Despite their complexity, the ENVY team met with the challenge admirably and, with skilful integration of the CG elements, have produced another set of striking idents for the campaign.”

Mike Leeson, Managing Director of Advertising at Golley Slater, adds: “This new set of idents for Documentaries on Channel 4 marks the latest set in a series of ten films we’ve created for Mitsubishi Motors. This sponsorship package forms a key strand of our advertising strategy, for which we’ve produced a creative solution which is genuinely intriguing and engaging.”