By newsroom on November 16, 2015Comments Off on National Book Tokens launches new campaign this Christmas 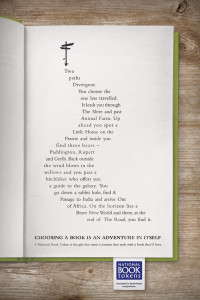 Media agency Maxus has launched a new campaign for National Book Tokens called “Choosing a book is an adventure in itself”. The campaign seeks to raise awareness for the gift card and reaffirm why a National Book Token is the perfect gift for book lovers.

“Choosing a book is an adventure in itself” celebrates the journey of discovery that book lovers undertake when selecting a new read.

National Book Tokens is the only gift card sold and accepted in all major bookselling chains and local independent book shops across the UK and Ireland.

Mike Burt, marketing manager at National Book Tokens, said: “Christmas is one of the most important times of year for booksellers. This campaign not only celebrates books but also the journey that people take to discover a new one. It is this sentiment that we wanted to highlight, that by giving a National Book Token you are giving an experience not just a present.”

Vince Amato, account manager at Maxus said: “National Book Tokens have been on Christmas lists for generations. With Christmas a key season within the publishing calendar, the campaign allows for consumers to be reminded of their own experiences when choosing a book.”

The creative concept was devised by Arthur London and all media and planning was handled by Maxus.