Pepsi Calls Audible: 1D To “Suit Up” In Football Pads

By newsroom on November 9, 2012Comments Off on Pepsi Calls Audible: 1D To “Suit Up” In Football Pads

Drew Brees.  The new creative offers a twist-ending featuring the One Direction band members getting a taste for football. The spot begins airing tonight on FOX.

The ad centers around a friendly showdown for the last can of Pepsi. The original spot features One Direction inviting Brees to join the band so that One Direction member, Harry Styles, can enjoy the refreshing Pepsi.  In the new edition of the spot, Brees gets to keep the Pepsi and, in return, offers the band a chance to try out for the football team.  Fans can tune in tonight to see U.K. band One Direction as they have never been seen before – suited up in American football gear.

“Our latest ‘Live For Now’ spot has received an enormous amount of buzz and online excitement,” said Angelique Krembs, VP Marketing, Pepsi.  “But the story doesn’t stop there.  We had to ask, ‘What would happen if Drew won the last can of Pepsi?’  And of course everyone wants to see the boys from 1D suit up in football gear and have some fun.”

The campaign, which continues to include television ads and newly released behind-the-scenes digital content, was produced by TBWA/Chiat Day, directed by Baker Smith, and features One Direction’s chart-topping single “Live While We’re Young.”

In addition, Pepsi fans who “Shazam” the new iteration of the spot on both TV or online will be able to view exclusive new content, as well as link back to iTunes to purchase One Direction’s new single “Live While We’re Young.”

Tune in to THE X FACTOR tonight, Thursday, Nov. 8 (8:00–9:00 PM ET live /PT tape-delayed) on FOX, to see the surprise ending of Pepsi’s popular commercial, along with a two-song performance by One Direction. 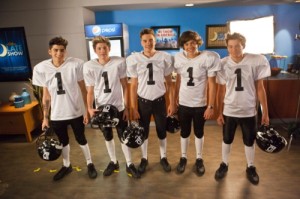 Pepsi Calls Audible: 1D To “Suit Up” In Football Pads added by newsroom on November 9, 2012
View all posts by newsroom →