By newsroom on October 16, 2015Comments Off on PepsiCo Exec Brad Jakeman Has Tough Words for Agencies 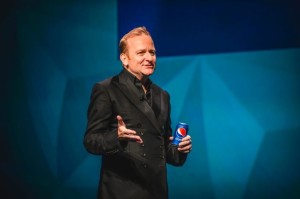 Ad agency models are breaking. Pre-roll ads are useless. Measurement models are outdated. The ad industry lacks diversity. And the phrase digital marketing should be dumped.

Those statements were among the declarations made on October 14, by PepsiCo exec Brad Jakeman in a fiery, truth-telling presentation at the Association of National Advertising’s annual “Masters of Marketing” conference in Orlando, Fla.

Mr. Jakeman — who is president of PepsiCo’s global beverage group — went so far as to suggest that even the phrase “advertising” should go by the wayside. He did so before 2,700 marketing and agency professionals at an event put on by an association that has the word advertising in its name. “Can we stop using the term advertising, which is based on this model of polluting [content],” he said.

“My particular peeve is pre-roll. I hate it,” he added. “What is even worse is that I know the people who are making it know that I’m going to hate it. Why do I know that? Because they tell me how long I am going to have to endure it — 30 seconds, 20 seconds, 15 seconds. You only have to watch this crap for another 10 seconds and then you are going to get to the content that you really wanted to see. That is a model of polluting content that is not sustainable.”

But Mr. Jakeman, whose talk was called “Designing for Disruption,” saved his toughest words for ad agencies. “The agency model that I grew up with largely has not changed today,” he said, noting that he has been in the ad industry for 25 years. “Yet agency CEOs are sitting there watching retainers disappear … they are looking at clients being way more promiscuous with their agencies than they ever have.”

Continuing the rant, he said that the “global alignment agency is a dinosaur concept” and he questioned the level of innovation. “I am really worried that this model is not going to bend — it’s going to break if we don’t really think about how to innovate,” he said.

Mr. Jakeman also ripped the industry’s lack of diversity. “I am sick and tired as a client of sitting in agency meetings with a whole bunch of white straight males talking to me about how we are going to sell our brands that are bought 85% by women,” he said. “Innovation and disruption does not come from homogeneous groups of people.”

Indeed, agencies — or at least the agency of record concept — had a tough day in the opening session of the ANA event, which ends October 17 and is being held at the sprawling Orlando World Center Marriott.

Harley-Davidson Chief Marketing Officer Mark-Hans Richer — who delivered a late morning presentation — responded to a question about agencies by pointing out that the motorcycle marketer works with a lot of shops and takes a “boutique” approach. “We have not had a lead agency in about five years,” he said. “Clients must take more responsibility for creativity. It’s not the kind of thing that you should offshore.”

Disruption has been an early theme at the conference. Marketers presenting on the stage so far appear to be taking less time showcasing big campaigns and TV ads, as in years past, and more time talking about how they need to rethink their organizations and approaches from the ground up.

Mr. Jakeman’s presentation was almost completely devoid of self-promotional Pepsi marketing, with the exception of the blue Pepsi can he carried in his right hand. And while he questioned agency models, he was also critical of marketing organizations for not changing with the times.

He said he has been to many marketing conferences and has seen some really creative things, which he said was “awesome.” But he “hasn’t seen our industry really push for incredibly disruptive things,” he added. “We are still talking about the 30-second TV spot. Seriously?”

He also criticized the industry for outdated measurement systems. “We still talk about share of voice,” which, he said, is a television metric.

And he pointed out that big consumer packaged good companies still measure marketing spending as a percentage of net revenue. “That assumes that paid media is the only way to build brands,” he said. But that is wrong because content generated by others on a brand’s behalf, for instance, “doesn’t cost us a cent,” he added.

Mr. Jakeman called digital marketing the “most ridiculous term I’ve ever heard.” He added: “There is no such thing as digital marketing. There is marketing — most of which happens to be digital.” He urged marketers to create digital cultures, not digital departments. “We ‘ghettoize’ digital as though it’s the life raft tethered to the big ocean liner. And we have to move on from that.”

Mr. Jakeman said he struggled to come up with any examples of “disruptive” changes in the “world of commercial brands.”

So he turned to the example set by Caitlyn Jenner, praising the way she “managed her transition … figuratively and literally as a brand.” The process — from the Diane Sawyer interview to the Vanity Fair cover — was thought-provoking, authentic and profound, he said. “This was something that the world was talking about, and the world has continued to talk about.”

Then he posed a question to his fellow marketers: “Have we done anything with our brands that is in any way as remarkable as the way Caitlin Jenner, and that phenomenon, has been managed?”

PepsiCo Exec Brad Jakeman Has Tough Words for Agencies added by newsroom on October 16, 2015
View all posts by newsroom →