By newsroom on June 7, 2018Comments Off on Poster transforms rain into a deadly trap against mosquitoes that transmit Dengue, Zika and Chikungunya

In tropical countries like Brazil, it rains all year round, increasing the accumulation of standing water and the outbreaks of the Aedes Aegypti mosquito, which transmits the Dengue, Zika and Chikungunya viruses, and other diseases – mainly in favelas and difficult access areas. 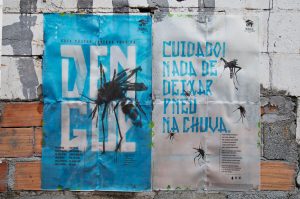 To reach those places raising awareness and fighting against the insects, Habitat for Humanity Brazil, in partnership with the advertising agency BETC São Paulo, created special posters that dissolve in the rain and kill the mosquito before they hatch.

In addition to informing the population about the danger of standing water accumulation, the only way to combat the mosquito is to eliminate its larvae in its breeding sites. To join these two initiatives, the NGO and the agency developed “The Dissolving Poster”.

This initiative was born from a powerful larvicide, the BTI (Bacillus Thuringiensis Israelensis), developed by one of the most prominent health science and technology institutions in Latin America. It was added to a soluble rice sheet and organic glue. 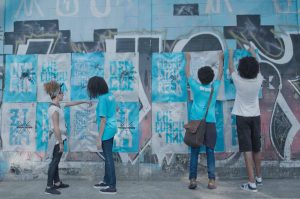 On sunny days, the posters carry educational messages that teach people how to avoid standing water. And, when it rains, the sheets dissolve, going with the water flow, releasing the larvicide in its composition and eliminating the mosquito larvae on its path. With just one poster it is possible to exterminate the Aedes Aegypti focus in up to 200 liters of water for at least 60 days.

“It is very difficult to make people be aware of the issue, even when it comes to garbage, rubbish and domestic waste. It’s all there, with that rotten water standing on the streets” says Dona Dilza, a resident of the Heliopolis community, located in the south of São Paulo. “The project comes in an innovative way. It educates, prevents and kills the mosquito where people do not reach” adds Denis Pacheco, Habitat Program Coordinator. 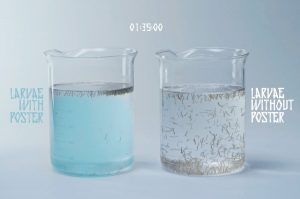 On June 9, another activation to combat Aedes aegypti will happen in Heliopolis (SP). Habitat Brazil volunteers and residents of the community will coolaborate to put several posters on the main spots of the community, from 9am to 12pm. The activation, which first began on this same region in April, has been carried out in partnership with UNAS (Association of Residents of Heliópolis and Region).

In addition, the posters also have a special developed technology that does not harm the environment, animals nor people – acting only against mosquitoes. On top of that, there are different types of illustrations created by Ricardo Célio, Feik and Puga Menezes – artists who are from some of the communities affected by the problem.

Poster transforms rain into a deadly trap against mosquitoes that transmit Dengue, Zika and Chikungunya added by newsroom on June 7, 2018
View all posts by newsroom →