By newsroom on January 8, 2016Comments Off on Public urged to ‘Supercharge ParalympicsGB’ in major new fundraising campaign

The British Paralympic Association urged the British public to help ‘Supercharge ParalympicsGB’ and show their support for our athletes over the course of 2016 and beyond.

Supercharge ParalympicsGB is the first time that the British Paralympic Association (BPA) has launched such a major public facing campaign to generate support and raise funds for ParalympicsGB.

The ParalympicsGB team will face its toughest competition yet in Rio with standards increasing across all sports among other nations and that is likely to become even harder over coming Games. Following a home games in London the team also faces a decade of long haul travel – with upcoming Games in Rio, Pyeongchang, Tokyo and Beijing. It will be more challenging and expensive than ever before for the BPA to support athletes that in turn can inspire real change across society through their performances.

The BPA, a registered charity, has historically received some public fundraising support but the ‘Supercharge ParalympicsGB’ campaign will take this to a whole new level and a major drive to fundraise money to help take ParalympicsGB to Rio and beyond.    Alongside the fantastic support already received from the National Lottery and the BPA’s commercial partners, the funds raised will help best prepare the team in the crucial final days before Rio and lay the ground for future success.

Supercharge ParalympicsGB is being supported by the BPA’s blue chip commercial sponsors and by four high-profile Ambassadors: 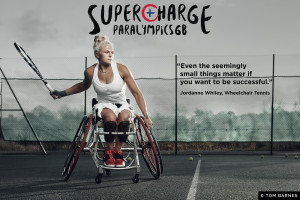 “The Rio 2016 Paralympic Games will be the toughest, most competitive Games yet and ParalympicsGB will need to be the best it’s ever been to win the medals the nation craves. The team needs as much support and preparation as possible in the final crucial months of preparation to win those medals and ensure Great Britain continues to be a leading force in Paralympic sport over the next decade. I am delighted to be part of this campaign to ask the British public to give its support.”

Fellow BPA Patron and disability sport supporter Clare Balding is also one of the Supercharge ambassadors. She said: “Paralympic sport goes from strength to strength and we saw in London just how much the British public got behind the ParalympicsGB team. I know that ParalympicsGB will absolutely enthrall and excite the British public again this summer. But to do so they will need to make sure that everything they do is world-class so that they can produce those world class performances.” 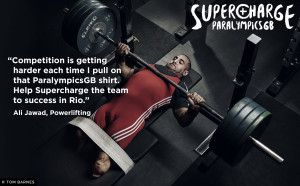 Comedian Eddie Izzard is a long-term supporter of diversity and a keen athlete. He commented: “London 2012 showed the nation that the Paralympic Games and the ParalympicsGB team are the most inspiring team in the UK. Their success this summer will inspire the nation, continue to challenge perceptions and ultimately help create a better world for disabled people. But to do that the public needs to get behind the team and help to fund their success through donations and fundraising. ”

Tim Hollingsworth, Chief Executive of the British Paralympic Association, said of the launch: “We want to leave no stone unturned in our efforts to win medals and make the nation proud in Rio and beyond. That means getting the public and our partners involved to help to Supercharge the team to make the ParalympicsGB team as successful and inspiring to others as possible. 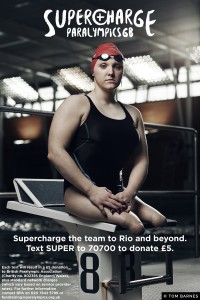 “We have incredible support already from the National Lottery and UK Sport, but the crucial final part of the journey to Rio requires as much funding as possible to ensure the team are ready for success. That is why we are launching this campaign and asking the public for its support. How far all our athletes go depends on you!”

The Supercharge ParalympicsGB campaign launch includes the release of a new inspiring campaign film and some iconic imagery of ParalympicsGB stars including Jonnie Peacock, Ali Jawad, Jordanne Whiley, Libby Clegg and Will Bailey.

The campaign also offers the public a Text to Donate facility – TEXT “SUPER” to 70700 – and a wide range of fundraising tools and equipment.

The campaign has been developed from the start with the fantastic pro bono support of major London creative agency RKCR/Y&R. Their strategic and creative expertise is central to the campaign’s delivery in 2016.

Public urged to ‘Supercharge ParalympicsGB’ in major new fundraising campaign added by newsroom on January 8, 2016
View all posts by newsroom →